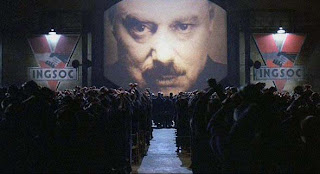 The Finnish Ministry of Justice (INGSOC) has now taken upon itself to instruct all newly elected city council officials -from the recent municipal elections- as to what constitutes…’hate speech’.

Folks, the Finnish political elite are dumbstruck that the average Finn has voted into power, in sweeping numbers, politicians who will address the peoples’ concerns about mass immigration.

It’s also important to understand the thinking that drives the supporters of the multicultural project. Though the political elite refuses to say it out loud, they deem anyone who has a serious doubt, or raises a serious complaint about mass immigration, as either being a racist, or entertaining ‘racist thoughts’.

Right now the mandarins of the utopian multicultural project are in shock that their wisdom has been called into question, and they now seek to stanch any further erosion of their base by labeling all critics of mass immigration, as possible ‘spreaders of hate speech’ or ‘incitement of a national group’.

The person being vilified in the interview transcribed below, is none other than Jussi Halla-aho, the second largest vote getter for the PS party in Helsinki. He is slandered in the YLE interview as having been openly ‘anti-immigrant’, instead of being described as just a critic of mass immigration. Halla-aho is not a racist, is not against immigrants or immigrant groups, but against the current governments policies in regards to mass immigration as being the only solution in solving the supposed crisis in the work market, as well as the Govt’s turning a blind eye to the criminal activity amongst Finland’s immigrant community.

Both YLE and the political elite know fully well that to black ball a politician in such a way, is to automatically sideline both him and his message. It’s a very effective way to relegate the offending person into the ranks of the ‘racists’, when that’s done, there is nothing else left to discuss. The TT believes that the only slandering currently going on in the political arena presently, is of PS candidates and the party itself. That is what PS party spokesman, Timo Soini, points out in the interview. KGS 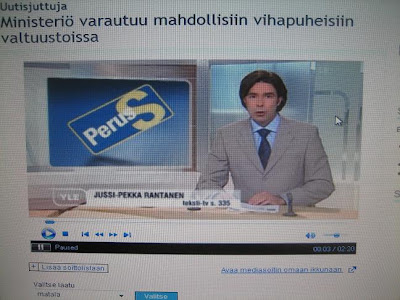 YLE News: The Ministry of Justice will begin instructing Municipal Council spokesmen against the possibility of hate speech incitement. One of the reasons for the necessity of the instruction is the Perussuomalainen (True Finns) sprint to power. Spokesman Timo Soini warned against slandering the party (PS) in vain.

The rise of hundreds of True Finn party members as decision makers has also flustered the Justice Ministry. The Ministry will begin instruction for the Municipal Council Spokesmen in order that the platforms of power will not be used to hurl insults. 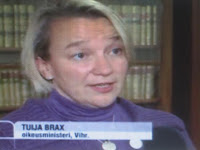 Tuija Brax (Greens Party): “This kind of instruction has been hoped for already, for a long time. This isn’t just necessary solely because of the Perussuuomalainen party, or some of their candidates that have been elected, there has been anti-immigration sentiment found in some of the other parties as well.

Timo Soini: It’s not worth to get all bothered now, take things peacefully, elective office starts at the beginning of the year and they are sensible, well schooled people, and what the law states concerning speech…

YLE: What does it demand? 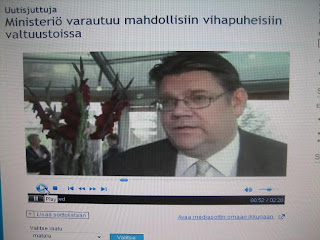 Soini: Well the law states for example that incitement against a national group is illegal, and a punishable offence, and it should be punished, but the problems with immigration should be allowed to be spoken of realistically and truthfully.

YLE: In Pohjanmaa (western Finland) Perussuomalainen party gained the top three spots in the county, the area has very little immigrants, but a newly elected official ensures that racism will not be permitted.

Unto Mannistö: […] I can’t speak for others, but the kind of people that were elected here are very business like (objective).

YLE: One of the PS party’s candidates that received a lion share of the votes, openly positioned himself as a anti-immigrant candidate.

Timo Soini: Demonization of people (party members) must be truly condemned, we have a terrible example in Holland with the fate of Pim Fortyn, it’s a serious matter that you can’t play with. 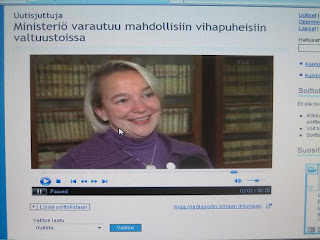 Tuija Brax: (Laughing) We’re speaking about Finland, I’m not going to stir such things up that political violence in Finland will begin to raise its head.

YLE: According to the Minister of Justice, anti-immigrant attitudes are now presently a problem, but Council leaders will be trained to censor all kinds of slander.
NOTE: You bet they will be trained in ‘mind think’, all lined up in a row and forced to sit and be lectured by the JoM in what they are allowed to think and say. In other words, if a politician’s thinking strays from the government’s own stated policies and ideology, you can be assured that the offending politician will be facing a crackdown from on high. Video is viewable here. H/T: VasarahammerNOTE: For a taste of things to comes, just read up on the case of political persecution of a Vlaams Belang politician, Bart Debi. Diana West reports on the politician’s victimization which has led to his being incarcerated for a year in ‘Fascist little Belgium’. West says it all here.FROM THE COMMENT SECTION:Emmanuel: “Well, even the most extreme hate speech against SOME minority groups – such as Estonians – is fully allowed and even encouraged in Finland, and those who critically respond to such hate speech in a civilized manner, are silenced, demonized and criminalized. Talk about double standards!”UPDATE: Finnish blogger Pikkupoika informs the TT that the YLE journalist who reported the story, Paula Näyhä, was responsible for some unprofessional journalism back in May of this year. In reporting on internet racism in Finland, she trumped up the charges that Finland is experiencing a surge in racism in the internet, that just didn’t pass the test of believeable journalism. Pikkupoika has more here in Finnish, Vasarahammer has more on it here as well.