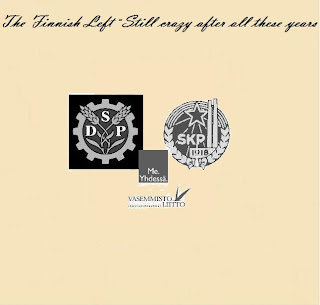 Paul Simon’s album title came to mind while reading the Left’s griping and whining in today’s Helsingin Sanomat, about why they received such a drubbing by the Right-wing in the recent elections.
In an article reporting on why the Finnish Social Democrats (SDP) and the Vasemmisto (The Left) failed to garner votes in their traditional areas of support in Helsinki, a person representing “The Left”, Tommi Uschanov, states:
HS: (subscription) What did the Left leave undone, or did wrong that the True Finns (PS) dipped into their voter base? Well it left aside any public discourse on immigration politics said Uschanov. Also within the SDP camp it was noticed that the critics of Islam were successful in the cities where the SDP had lost.
Mitä vasemmisto on jättänyt tekemättä tai tehnyt väärin, kun perussuomalaiset kerää siltä kannattajia? Ainakin se on jättänyt väliin julkisen keskustelun maahanmuuttopolitiikasta, Uschanov sanoo. Myös Sdp:n piirissä on huomattu, että “islam-kriitikot” ovat menestyneet kaupungeissa samalla kun demarit ovat hävinneet.
The Left is totally clueless as to why people are upset with the thought that they will soon become a minority within the areas they call home. Anyone caught bucking that thought is immediately to be dragged before the Ministry of Justice for re-education lessons on what it means to be a good citizen.
People are pissed off that they have spent their life’s hard work in building a society that they can be proud of, only to see mass immigration spoil their dream of what Finnish society should be, or what they were promised it would be. Denial is in the air.
Islam is indeed a threat to a liberal, pluralistic democratic society, and the fact that the Leftists still have problems figuring out why that is so, is disturbing. In EVERY COUNTRY where Islam has washed up on its shores, after a certain demographic percentage is achieved, the demands by the many different Muslim groups begins. The trend is repeated over and over again. How much longer before the Left….finally gets it? KGS