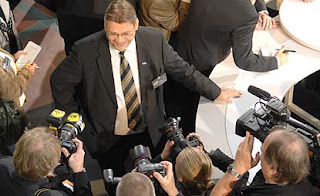 Municipal elections in Finland yesterday resulted in major gains for Right-wing parties in Finland. Also gaining seats were the Greens party, but the biggest news was about the Perussuomalainen party, (True Finns) headed by Timo Soini (pictured) whose party increased its share to 5.5 % throughout the whole country.

YLE: “The surprise victor in these elections is the True Finns Party. Although still a small party with few seats on any city council, the party posted a stunning rise in popular support. Party chair MP Timo Soini, who was running for a seat on the Espoo city council, also garnered more votes than any other politician in the country.Since the last municipal elections in 2004, the True Finns have risen from relative obscurity to become the sixth largest party in the nation. At that time, they earned less than one percent of the vote. Now, they have multiplied their popular support to 5.5 percent. Soini says he believes this strong growth will also be reflected in the next Parliamentary elections.”

The Tundra Tabloids posted earlier about the charges of racism and xenophobia being leveled at the True Finns by the Swedish Peoples Party, and seconded by the Central Party leader, Matti Vanhanen (who apologized for the reprinting of the Mo cartoons in Finland). Well the Finnish electorate decided what they thought of the underhanded statements, and gave both parties a serious slap down.I must admit to being pleased by the irony that True Finns candidate, Jussi Halla-aho received more votes than Minister of Immigration and Europe, “Auntie” Astrid Thors, from the Swedish Peoples Party. (RKP) 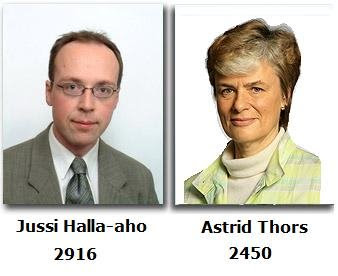 It’s obvious that the people of Helsinki rejected her silly accusations, as nothing but an attempt at political mudslinging in trying to tar the PS party as a bunch of racists, in order to stanch the flow of votes bleeding from her RKP party. Too bad the Finnish media was helping spread the slanderous claims, but the Finnish people weren’t buying any of it. This morning YLE tried to conjure up the spectre of racism and xenophobia one more time in its English news segment, to which Timo Soini stated matter of factly that he is a Catholic (a minority religion in Finland) and it’s against his belief system to be a racist. Just how many times the media wants to kick that dead horse around is anyone’s guess, but it’s increasingly becoming the news itself, not the charges. KGS