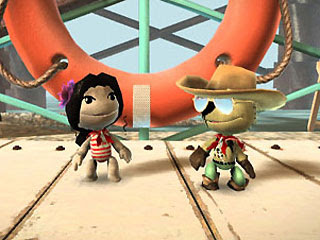 Heaven forbid that any member of the ROP would be offended by anything, even by a cross eyed stare!
Fox: One of the fall’s most anticipated video games for the PlayStation 3, Sony’s “LittleBigPlanet,” had to be yanked from shelves at the last minute Monday because it might accidentally offend Muslims.
“One of the background music tracks that was licensed from a record label for use in the game contains two expressions that can be found in the Quran,” Sony said in a statement Monday. “We have taken immediate action to rectify this and we sincerely apologize for any offense this may have caused.”
The piece of music in question is “Tapha Niang” by the Grammy-winning Malian musician Toumani Diabaté, who sings and plays a West African stringed instrument called the kora. Devotional music doesn’t raise eyebrows in many Muslim countries, including several in West Africa including Mali, but it’s a no-no for some strict Sunnis, who frown upon instrumented music of any sort.

As long as there are useful stooges that refuse to say TOUGH LUCK, or TAKE A HIKE, the ROP will continue to be successeful in intimidating the non-Muslim world. For the record, the TT says TOUGH LUCK AND TAKE A HIKE to those religionists who follow the madman from the Arabian desert, and think that the whole world owes them something. KGS