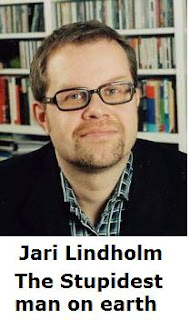 Now folks, it’s not that I want to drive this thing into the ground, I really don’t, but I just can’t let this Finnish journalist, Jari Lindholm get away with his buffoonery. As I understand, Lindholm works for the prestigious Finnish magazine, Suomen Kuvalehti, so this guy moves around in very influential circles.
I happened to spot something at his blog, The Stupidest Man on Earth, concerning the statements by a Finnish Lt.Col Manu Tuominen about the recent suicide/homicide bombings in Afghanistan. The Lt.Col is actually optimistic about the progress inside Afghanistan, and sees the spate of suicide bombings as “an indication of rebels’ “desperation”.
HS: “High-profile bomb attacks by extremist groups in Afghanistan are seen by Lieutenant-Colonel Manu Tuominen, the commander of Finnish crisis management forces in Afghanistan, to be more an indication of growing desperation among hard-line rebels and a decline in support among civilians, than of increased resistance.
Tuominen, who has been attending a meeting of Finnish crisis management forces at the Finnish Defence Forces International Centre in Säkylä this week, says that international efforts have brought results especially in the northern part of the country, where children have been able to go to school, economic improvements have taken place, and the position of women has improved.
Well that’s just way too much for the ideological Lindholm to stomach, how dare a professional soldier, a Finn no less, give such a rosy estimate of a war gone sour.

TSMOE:But even when the ship is sinking, you can always count on a Finn to stand up and loudly claim it was built as a submarine in the first place. Sure enough, in today’s Helsingin Sanomat, my hometown newspaper, Lt. Col. Manu Tuominen, who heads ISAF’s tiny Finnish contingent in the north, heroically came out against practically everyone else in the world.

You might wonder why I take issue with such obvious nonsense. Here’s why: Tuominen may only have 100 troops at his disposal, but he wields enormous political clout in Helsinki. For all practical purposes, he’s the commander of the first Finnish military force to fight a war since 1944. What he says makes big headlines, and politicians listen to him carefully. Many MPs can see through his bullshit, but it’s irresponsible nevertheless, because sooner or later it will end up in a memorandum somewhere and influence our already incoherent Afghan policy.”

But wait, though I’m not an expert on terrorism, or waging war against it, I do know however that terrorist strikes are signs of desperation, not of vitality and staying power. The only time journalists like Lindholm believe that the killing of innocents is a losing strategy, is when they are talking about US allied forces.

Now, the very astute Finnish blogger, Vasarahammer, has something more to say about Lindhom for which I am greatful, because it adds another dimension to the sotry behind the man. Remember, this guy, Lindholm has direct access to a serious Finnish news journal and his views, I believe, are widely represented in his chosen profession.

Vasarahammer: I wrote about Lindholm way back in the summer of 2007. Then he criticized Erkki Nordberg for his relatively realistic impression (edit: in Finnish) of islamic ideology. Back then Lindholm still had his old Finnish language blog, which has then disappeared from the internet. He was notorious for not allowing comments in his blog.

All in all, Lindholm’s own writings are essentially dull and lack any kind of insight. He’s an arrogant elitist snob who mostly quotes American MSM media reports about Iraq and Afganistan. Lindholm hates Christianity like most Finnish journalists and that is why he dislikes Palin so much. Evangelicals like Palin or Finnish Christian Democrat leader Päivi Räsänen, are routinely vilified by these clowns.

By the way, I later read Erkki Nordberg’s book “Islamistinen terrorismi” and it was not very good. However, Nordberg seems to have understood the islamic ideology properly.

Thanks Vasarahammer, you helped to fill in the holes in the story about this guy, we now have a fuller picture of the man, I mean the The Most Stupidest Man on Earth. KGS