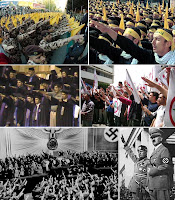 By John Rosenthal. When protesters in Cologne last month managed, with the blessing of the city government, to prevent the holding of an “Anti-Islamification Congress,” the cancellation of the event was widely hailed in the German and international media as a victory against “right-wing extremists” or, more simply put, “Nazis.” (See [1] here, for instance, from the English-language site of the German weekly Der Spiegel.)
[2] A new report from the domestic intelligence service of the German city-state of Hamburg shows, however, that actual neo-Nazi groups in Germany — i.e., groups that themselves embrace this description — in fact likewise opposed the “Anti-Islamification Congress” and are notably hostile to its sponsor, the “citizens’ movement” Pro-Cologne [Pro-Köln].
While the neo-Nazis agitate against what they describe as Germany’s “flooding by foreigners” — or “Überfremdung” — they take precautions against criticizing Islamic influences or Islam as such, since the latter is rather “to be seen as an ally.”
The report of the Hamburg intelligence service — known as the Office for the Protection of the Constitution [Verfassungsschutz] — points in particular to the hostility of the neo-Nazi North German Action Office to Pro-Cologne’s “Anti-Islamification” campaign.
As the report notes, for the North German Action Office [Aktionsbüro Norddeutschland], Islam, “globally considered,” is to be regarded as “an ally against the mammonistic dominance of the American east coast.” Allusions to the American “east coast” are commonplace in Nazi discourse, with the expression meant to connote “Jewish” domination of America and, by extension, the world.
[3] In a statement published on its website (German link) on September 25, five days after the “Anti-Islamification Congress” was banned by Cologne municipal authorities, the North German Action Office writes more fully on the subject as follows:
“Pro-Cologne’s” superficial populism against Islam sends a completely wrong signal, about which only pro-Israeli circles could be happy. Whoever thinks things out more completely than the niche-populists of Pro-Cologne will clearly differentiate between the “Anti-Islamism” that is fostered by the establishment parties at the behest of the USA and the necessary fight against the policy of flooding Germany with foreigners [Überfremdungspolitik], whose authors are likewise the establishment parties. Islam is not the cause of the flood of foreigners, but only a particularly visible symptom. … The problem is the system, not the mosques.
Inasmuch as it is a determined opponent of the western-plutocratic one-world policy, we regard Islam, globally considered, as an ally against the mammonistic dominance of the American east coast. The freedom of nations is not threatened by Islam, but rather by the imperialism of the USA and its vassals from Jerusalem to Berlin.
The statement bears the title “The Sheep in Wolf’s Clothing and Their ‘Anti-Islamification Congress.’” As opposed to Germany’s mainstream media, which suggest that Pro-Cologne is a “wolf in sheep’s clothing” — i.e., an apparently “normal” democratic party that in fact harbors radical intentions — the North German Action Office accuses it of being rather a “sheep in wolf’s clothing.”
[4] The “Campaigns” page of the North German Action Office website includes links with titles such as “National Socialists in Lower Saxony,” “Free! Social! National!,” and “May 1 — Day of struggle for national Socialism.”
H/T: Andy Bostom