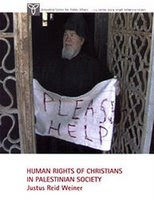 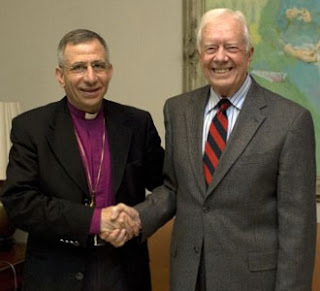 –Under the Palestinian regime Christian Arabs have been victims of frequent human rights abuses by Muslims. There are many examples of intimidation, beatings, land theft, firebombing of churches and other Christian institutions, denial of employment, economic boycotts, torture, kidnapping, forced marriage, sexual harassment, and extortion. Palestinian Authority (PA) officials are directly responsible for many of the human rights violations. Muslims who have converted to Christianity are in the greatest danger. They are often left defenseless against cruelty by Muslim fundamentalists. Some have been murdered.

–Christian Arabs also fall victim to the chaos and anarchy typical of PA rule. This situation is fostered by societal rigidity, criminal gangs, lack of education, absence of due process, incitement, unreliable courts, and the denial of these problems-all running counter to Israel’s desire for a prosperous and stable neighbor.

–Muslim attitudes toward Christians and Jews are influenced by the concepts and prejudices about their inferiority that the practice of dhimmitude has spawned in Islamic society. As dhimmis, Christians living in Palestinian-controlled territories are not treated as equals of Muslims and are subjected to debilitating legal, political, cultural, and religious restrictions.

–The human rights violations against the Christian Arabs in the disputed territories are committed by Muslims. Yet for political and economic reasons many Palestinian Christian leaders blame Israel for these crimes rather than the actual perpetrators. This motif of the transference of blame has been adopted by several Christian leaders in the Western world. Others there who are aware of the PA’s human rights abuses choose to remain silent.

“The disputed territories of the West Bank and the Gaza Strip have been administered by the Palestinian Authority (PA)-and recently, in part, by Hamas. As a result of the Oslo peace process, the Palestinians were able to establish their own quasi-government. Under this regime the Christian Arabs in these territories have been victims of frequent human rights abuses including intimidation, beatings, land theft, firebombing of churches and other Christian institutions, denial of employment, economic boycott, torture, kidnapping, forced marriage, sexual harassment, and extortion.

“Muslims who have converted to Christianity are the ones most in danger. They are often left defenseless against cruelty by Muslim fundamentalists. PA and Hamas officials are directly responsible for many of the human rights violations. Christian Arabs also fall victim to the chaos and anarchy that typifies PA rule.”

Justus Reid Weiner* is an international human rights lawyer and a member of the Israel and New York bar associations. His professional publications have appeared in leading law journals and intellectual magazines. Weiner lectures widely abroad and in Israel and teaches international law and business courses at the Hebrew University of Jerusalem.

The TT reccomends picking up Manfred Gerstenfeld’s latest book: “Behind the Humanitarian Mask” The Nordic Countries, Israel and the Jews.