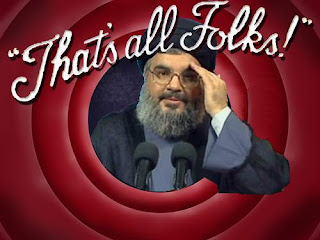 “Israel The enemy of Islam”
The only way to interprit the Middle East, is to listen very closely to what the Islamonazis are saying. Hizbullah Secretary-General Hassan Nasrallah, Friday evening:
“Jerusalem and Palestine, from the sea to the river, belong to the Palestinian people, the Arabs and the Muslims, and no one has the authority to concede a grain of earth, wall or stone from the holy land,”

It doesn’t sound like pragmatic talk to the Tundra Tabloids, but yet Europe’s politicians still cling to the myth that supporters of tyrannical ideologies can be pacified, or nurtured to not hate as much, if we give in to negotiating with them and kiss their furry butts. Ynet has more:

“Speaking in Beirut in honor of al-Quds (Jerusalem) Day, an Iranian-declared observance, Nasrallah added, “Its stones, olives and figs are sacred, and no one has the right to give it up. This land must belong to its owners, and it will return, God willing.

“This day comes to stress a number of primary significations to the Muslims, so that the nation feels the intensity of the humiliation of past decades, when its holy places were occupied by racist Zionist hands. “This is the greatest humiliation of this nation. The second message is to stress the historic, religious and legitimate responsibility of the Muslim nation towards Jerusalem, Palestine and the Palestinian people.”

Our holy lands will not be liberated through talks with the West. The way to return the lands and liberate the Palestinian people is through desire, resistance and self-sacrifice in the region – the same resistance which succeeded in imposing itself on this entity.”

This is not going to end any time soon, not as long as European leaders continue to placate these bloviating genocidal Islamist supremacists. If Europe would just learn to stiffen up its spine and begin turning off the international aid and development funding until the states in the region begin to change their ways, then perhaps some kind of headway could be gained.

But I doubt that it will happen anytime soon…or at all for that matter. One has to remember that the UN plays a key role in keeping the credibilty of region’s tyrants in good standing. Nothing better symbolizes the UN’s subservience to the states that sponsor terrorism than this photo. KGS

And they mean it with all of their hearts.