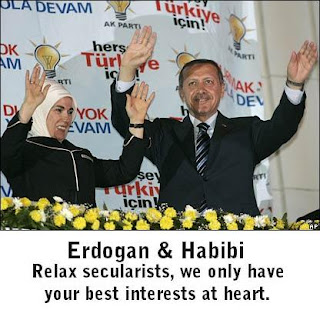 Three years ago, the Turkish government announced its intention to curb the sale of alcohol in restaurants and pubs, by creating special “drinking zones” in areas that would be far removed from city centers.
The high handed proposal angered a lot of secularists in Turkey who fear (with justification) that Turkish Prime Minister, Recep Tayyip Erdogan, and his ruling party of Islamists are going to try and ramrod his Islamist agenda down the throats of Turkey’s secular society one way or another.

Just recently, the MEMRI Turkish Media blog reported that the ban started by Ergogan is spreading thoughout the city.

“Alcohol Ban Expands To More Restaurants In Istanbul”
MEMRI: The alcohol ban in Istanbul restaurants that PM Tayyip Erdogan started in his days as Istanbul’s mayor, is rapidly expanding to other locations in the city at the initiative of the current AKP mayor. According to media reports Istanbul municipality is canceling its lease contracts of businesses that sell alcoholic beverages in social locations and restaurants owned by the municipality.

A CHP committee member of the municipality objected to imposition of alcohol bans and requested a legal explanation for such moves. In response the AKP deputy mayor said, “We are not going to allow sale of alcohol, so what? This is nothing compared to the turban [Islamic headscarf] ban [in universities]”. Many restaurant owners in various districts of Istanbul are complaining about the difficulties they are facing regarding service of alcohol in their restaurants.

The AKP deputy mayor’s response is indeed telling. The speed in which alcohol is being banned in Istanbul’s restaurants could be taken as a response to the headscarf ban being enforced by Turkey’s secularists, after the Turkish constitutional court upheld the ban.

But Turkish secularists are not going quietly into the night. They are noticeably voicing their objections to the Istanbul government’s ban on alcohol, which they correctly interpret as being part of its Islamist agenda to fully Islamize Turkish society. KGS

The residents of Moda, one of Istanbul’s most contemporary districts on the Anatolian side, have reacted fiercely against Islamic practices implemented by the Turkish government, who claims to be the strong supporter of freedoms, by protesting an alcohol ban at a quay restaurant. The sale of alcohol at the restaurant on Moda Quay has been banned by a ruling Justice and Development Party (AKP) municipality-owned company, Beltur, after it took over management of the restaurant.

Beltur’s move, which has ended a long-running service, drew fierce reaction from Moda residents, and led weekly protests at the entrance of the quay.
window. Moda residents, who gather to protest the ban every Friday, say the municipality’s move is an act of discrimination and restriction of freedom.

“We are standing against the ban, imposition and restriction of our choices in our district,” spokesman Ali Karli, read a statement on behalf of the residents at the latest protest meeting on Sept. 12.

“We are raising our voice against the separation of our society’s living space; as equal, free and independent citizens of a secular republic without obedience and kowtowing,” he added.

The protestors also blamed Turkish Prime Minister Tayyip Erdogan of implementing discrimination politics by lending his support to the alcohol ban application. “He is making discrimination by himself. It is one of the most basic rights of the society to sit and drink by the sea,” another resident said, adding that Erdogan would be a real prime minister when he also becomes the prime minister of Moda.

Moda is also seen as reference point for expressing the rising discomfort against the restriction of freedoms implemented by the government.

“Alcohol was prohibited in many other places of Turkey, but only Moda residents resisted this, and raised their voices,” Huseyin Aksen, a theater actor, who also attended the protests, said. Aksen added he expected this flare to spark similar action across the country.

The Turkish government, claiming to be the strong defender of personal rights and freedoms in society, has been long criticized by secularist circles within the society due to its de facto implementations aiming to limit social life.

The ruling AKP, also accused of executing such practices in the case filed for the closure of the party in March, deny the accusations and say there has been no such effort nor legislations aimed at achieving this end. But, some acts and incidents, including alcohol bans at municipality facilities in several regions in Turkey, signals that the party seems to fail at leaving aside its Islamic credentials.

NOTE: Special thanks to Vasarahammer for bringing to the TT’s attention about the wrong picture and caption. The correct picture of Erdogan and his wife is now in place. KGS