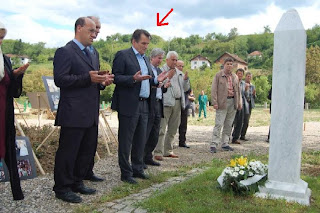 The way Haris Silajdžić sees it, only Muslims should be allowed to either break off into states of their own or govern themselves.

Adnkronos: “A Muslim member of Bosnia’s rotating presidency has provoked a controversy after demanding the abolition of the Serb entity, Republika Srpska, and correcting what he called ‘war errors’, during his speech before the United Nations.

Haris Silajdzic, who currently chairs Bosnia’s three-man rotating state presidency, told the General Assembly on Tuesday that the RS was “created by genocide in Bosnia-Herzegovina”. Silajdzic also added that the “UN should correct the errors made during the war in Bosnia and send a clear message that the genocide will not be rewarded”.

Riiiight! Amazing words, especially when they come from a man who knows full well that his own coreligionists, Bosnian Muslims, murdered hundreds of thousands of Serbs, as well as 60 000 Jews.

Or how about this! 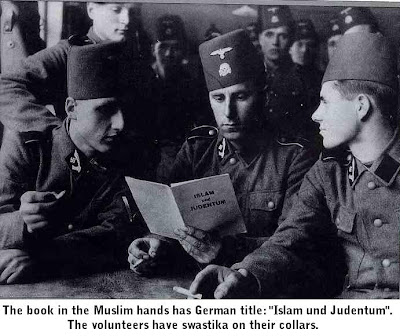 But how could this be? Modern mythology concerning the role of Muslims during WWII depicts the Balkans as a place of love and harmony between Islam and Christianity and Judaism. The picture on the right is of the Bosnian emblem of the Islamic scimitar with a National Socialist (Nazi) swastika.

Srdja Trifkovic, scholar and director of the Center for International Affairs at The Rockford Institute in Illinois sends the Tundra Tabloids a recent article of his concerning the ongoing trial of Radovan Karadzic, and the attempts of the tribunal court to turn history on its ear. The TT believes that it’s in everyone’s best interests, Muslims, Christians and Jews alike, that a complete, factual accounting of what went on during the Balkan war be compiled, and if at all possible, those who were accomplices to murder, be tried and convicted. But in the race to bring people to trial, there seems to be a willingness within the tribunal court itself, to accept obfuscations of the facts, as well as to “shoe horn” charges into a case which have already been proven by the ICJ to have been false.

The Hague vs. Karadzic: A Grim Update
by Srdja Trifkovic The amended ICTY indictment against Radovan Karadzic was made public by the Yugoslav war crimes tribunal on September 23. Its objective is not only to reinforce the charge of genocide against the former Bosnian-Serb leader himself and ipso facto against the Bosnian-Serb Republic (Republika Srpska), but also to make yet another attempt to assert the culpability of Serbia – and by extension the collective guilt of the entire Serbian nation – in that alleged crime.
The Tribunal is making the assertion of Belgrade’s complicity in an indirect and partly concealed manner. Unlike the original indictments (July-November 1995), amended in May 2000, in the latest modified indictment the OTP (Office of the Prosecutor) narrows down it focus on one “overreaching” and three “common” joint criminal conspiracies. The first of them accuses Karadzic of being part of a criminal conspiracy to carry out genocide in Bosnia in the areas claimed by Serbs.It claims that, in addition to a number of persons from the Republika Srpska, this “joint criminal conspiracy” included several former top officials of the Federal Republic of Yugoslavia and the Republic of Serbia, specifically former Serbian and Yugoslav President Slobodan Milosevic, former security service chief Jovica Stanisic, his aide Frenki Simatovic, and prominent politician Vojisal Seselj (Art. 11), as well as an indeterminate number of unnamed and unindicted personnel of the Serbian Interior Ministry, MUP, the Yugoslav People’s Army, JNA, and the Yugoslav Army, VJ (Art. 12). […]The ICTY OTP strategy is clear: to force Karadzic to defend not just himself against the charge of genocide, but also his various alleged fellow-conspirators in Serbia – named and unnamed – who have not been accused of this supreme crime themselves. His failure to do so will result in a conviction that will apply not only to him but also to all others.In preparing his defense Karadzic will naturally focus on himself and his own actions, as may well be expected of any accused. This will be just what the OTP wants: to smuggle the pan-Serbian conspiracy to commit “genocide” involving Belgrade – a charge so far unproven and rejected by the International Court of Justice – on the back of Karadzic’s indictment. If it is “proven,” at the ICTY, the Sarajevo Muslims will duly renew their case against Serbia at the ICJ.A year and a half ago, in a landmark case that put a nation on trial for genocide for the first time in history, Serbia was found not guilty by the International Court of Justice at The Hague. “The court finds that the acts of genocide at Srebrenica cannot be attributed to [Serbia’s] state organs,” said the ICJ president, Judge Rosalyn Higgins, in the ruling made public on February 26, 2007. She said it could also not be established that Serbia had been complicit by supplying aid to the Bosnian Serbs in the summer of 1995, when the killings at Srebrenica took place. Reflecting the complexities of the case, the 16 judges deliberated for 10 months. The court’s decisions are binding, without appeal, and enforceable by the UN Security Council. Read it all here.

What all this shows, is a willingness by our European political elite and European judiciary, to overlook the dark role Muslims have played in the atrocities they have committed in Europe over the years, as well as to hold them equally accountable for their direct contribution to the breakdown of regional stability. It is clear that the Hague’s main focus will continue to be on ethnic Serbs, no matter what.
The trend continues with Europe’s fetish for Muslim causes, now that Bosnia has created a state for itself which directly contributed to the Balkan war, -as well as the meddling by the EU and US- Kosovo has grabbed its own sovereignty, but at the expense of the Serbian state. The Hague appears not to be satisfied until the last Serb is thoroughly punished. So Haris Silajdzic’s shot over the bow of Serb entity, Republika Srpska, calling for its abolition, should be taken very seriously indeed. KGS