Mallam Mohammed Bello Abubakar, husband to 86 wives and father to more than 190 children is back in the news again, after he was arrested by Nigerian state police yesterday for insulting Islam. But hey, is he really guilty?

Here is a picture of his chattel/property. 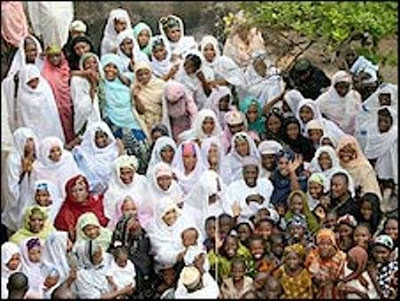 This Day Online: “The controversial octogenarian with 86 wives and 190 children , Malam Muhammed Abubakar Bello Masaba, was arrested by the Police in Niger State yesterday. He was arrested at his residence in Bida at about 4a.m when he was about to take his sahur (morning meal in preparation for the day’s fasting) and brought straight to Minna.

In Minna, he was arraigned before the Upper Shariah Court, Minna on a three-count charge of insulting or attempting a contempt of religious creed, deceitfully inducing belief of lawful marriage and marriage ceremony without lawful marriage contrary to section 210, 383 and 386 of the penal code respectively.

The accused had been ordered to be remanded in Minna Prison and the case adjourned till 6th of October for further hearing.The Attorney General and Commissioner for Justice, Barrister Adamu Usman, who was the prosecutor, read the three count charge to the accused, stating that his arrest early yesterday was in compliance with section 35 sub section 415 of the constitution of the country.

Usman requested that the octogenarian should not be granted bail because the Police needed sufficient time to carry out their investigation on the matter describing the offence as,”very serious in nature and we require some substantial time for police to complete their investigations.

“The accused who was accompanied by his second wife, his secretary and some of his followers, pleaded not guilty to the charges.The defence counsel, Barrister Shehu Muhammed Jibrin, had pleaded for bail for his client basing his plea on various sections of the constitution with emphasis on section 340 sub section I, section 341 and section 36 sub section 5 and that most importantly, the court has the jurisdiction to grant him the bail. 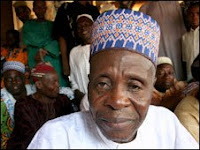 Let’s hear from the man himself , Mallam Mohammed Bello Abubakar, what he has to say about his alleged crimes against the religion of his prophet. The al-Beeb reported just this past August, that the same sharia court had demanded that Bello conform to Islamic law, and give up 82 of his 86 wives.
But Bello was having none of it. The Islamic preacher knows his Qur’an as well, and found nothing in it that forbade him from taking more than “just” four wives.
“Most Muslim scholars agree that a man is allowed to have four wives, as long as he can treat them equally. But Mr Bello Abubakar told the BBC:
“To my understanding the Koran does not place a limit and it is up to what your own power, your own endowment and ability allows. “God did not say what the punishment should be for a man who has more than four wives, but he was specific about the punishment for fornication and adultery.”
Well, …when one reads about the sexual exploits of the founder of Islam, you can then understand why some Muslim followers would believe it’s honorable to have as many wives as possible, in order to imitate the founder of their religion, who kept changing the rules to suit his own needs (only). KGS