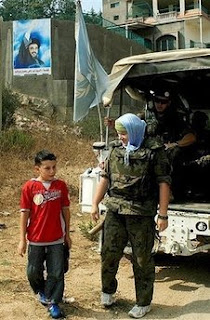 It has been said that: “the road to destruction is paved with good intentions”, and regardless of the immediate benifits Sylvia Monika Wyszomirska’s wearing of an Islamic headscarf/religious prayer garment is supposed to bring, they are more than outweighed by the immense confusion her decision brings to the rest of Western society, which has yet to render a decision on the Islamic scarf.
Please note how Hebollah’s Nasrallah cheers her on.

Clue for Wyszomirska, it ain’t a babushka darling, it’s a political/religious garment that adornes the heads of females within Islam. And it doesn’t stop there if there is a trend -in any given society- to increase Islam’s image and political clout. Soon there is a demand for more than just a scarf, but for a more “modest covering” of the female body, then there will be a demand for females to don a full tent.

This highlights the “goodism” mentality of the West, which fails time and again to see things as they really are, opting rather for a “kumbaya approach” to all they don’t understand. It’ll end, with the end, of their own freedoms as they now know it, but since they are daft about their own plight, we will see more and more “goodists” like Wyszomirska donning Islamic scarves, which is just a early warning shadow of their eventual dhimmitude.

GOV: Sylvia Monika Wyszomirska is a Catholic from Poland, but in an effort to integrate better into south Lebanon’s conservative society she has traded her UN peacekeeper’s beret for a headscarf during the Muslim holy month of Ramadan. “Out of respect for the environment I work in, I feel I need to try to integrate myself during Ramadan. And since my contingent is deployed in a Muslim area, I have decided to wear the hijab,” the Muslim veil, over military fatigues,” said 37-year-old Wyszomirska who has been stationed in the country for four months.

Wyszomirska chose a veil in the same light shade of blue used for the berets worn by members of the 13,000-strong United Nations Interim Force in Lebanon (UNIFIL), which keeps the peace along the tense Lebanon-Israel border. A native of Krakow, Wyszomirska works as a translator for the 200-member Polish contingent of UNIFIL, and her job brings her into direct contact with the people who live in Shiite-majority villages across the Marjayoun region. Her deployment to southern Lebanon is not Wyszomirska’s first encounter with Muslim tradition. She has also been to Kuwait and Iraq and worked in Syria as well to perfect her Arabic.

“When I was studying Middle Eastern languages at Jagiellonski University back home we also learned about the customs, traditions, history and geography of the countries we might end up working in, places like Lebanon, Iraq, Syria and Kuwait,” she said. Wyszomirska’s decision to wear the veil during Ramadan has helped to break the ice with local villagers, both for her personally and for her colleagues in the Polish contingent.

“At first relations were lukewarm, especially since we don’t come from a rich country with things to offer the people,” she said. “All we can offer them is respect and a smile. But since I started wearing the veil, people have been more welcoming with me and also with my colleagues. This has opened more doors and opportunities to strike up friendships. They began inviting us into their homes for coffee or sweets. And when we pass by the children smile and wave at us. Today I feel almost as if I have a second family in Debbine, Blat and Arid,” she added.”

You see how that works folks? Only when she begins to look/act like them, will they begin to be welcomed by them. Why is it that Westerners are always made to conform to Muslim customs when Islam comes a calling, or when Westerners go abroad to Muslim lands?

Here’s something worth pondering for all you fence sitters out there who have yet to decide on the Islamic scarf. For a female to don an Islamic scarf, would be the same for a non-Jewish male to wear a Jewish prayer shawl. It simply is not done. A non-Jewish male wearing a kipa inside a Jewish synagogue, is akin to taking off one’s shoes before going into a mosque. It’s a sign of respect.

For Muslims to demand a non-Muslim female to wear a scarf, goes way over the acceptable boundary of respect and falls into the category of imposing one’s own religious beliefs upon another. Time to end the nonsense of wearing the scarf…especially for non-Muslims. KGS