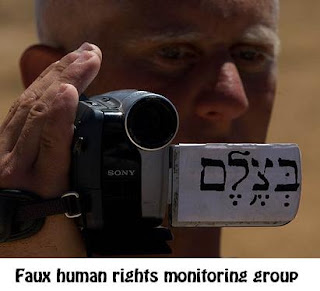 Attention media! Is your news room lacking that ” veneer of respectability” to its already biased news reporting on Israel? Make B’Tselem your first choice!
Not only will the faux Israeli human rights group provide questionable “facts and statistics” at your reporters’ finger tips, they’ll gladly participate in your badly one sided, anti-Israel interviews, even at a moments notice.
Provide your news room with that “veneer of respectability” with a proven insurance policy against charges of bias and one sided reporting.
Choose B’Tselem today.

The American media watch group CAMERA slams the left-wing Israeli human rights group, B’Tselem, in a recently published report on their website. It comes as no surprise to those of us who follow the conflict between the Israelis and the Arabs of the WB and Gaza on a daily basis. If the international media weren’t so biased against Israel, such nonsense as the B’Tselem reports would never be allowed to go unchallenged. The fact that B’Tselem’s documentation never receives closer scrutiny from the international media, testifies to their sloppiness, and most importantly, their agenda, that drives the news rooms to print one biased article after the other against Israel.

In 2007, B’Tselem Casualty Count Doesn’t Add Up
B’Tselem has pulled it off again, duping the mainstream media into believing it has tallied civilian Palestinian casualties when it has done no such thing. The oft-cited organization bills itself as a human rights group devoted to rigorous documentation of Israeli conduct in the West Bank and Gaza aimed at educating the public and encouraging political action. Yet the so-called documentation continues to be marred by serious flaws that journalists routinely ignore while reporting the group’s charges at face value.
B’Tselem, it should be noted, is heavily funded by European entities, including German, British, Irish, Dutch, Danish, Norwegian and Swiss groups, as well as the Ford Foundation and the New Israel Fund.
Among the most deceptive claims by the group are those embedded in its yearly statistical summary of Palestinian fatalities. B’Tselem reported in a Dec. 31, 2007 press release that in 2007 Israeli security forced killed 373 Palestinians and that “about 35 percent of those killed were civilians who were not taking part in the hostilities when killed.” These claims were reported without caveat in the New York Times, Voice of America, the Guardian, and the New York Jewish Week, among others.
Despite the press release’s statement about the percentage of those killed who were civilians, B’Tselem’s data do not actually break down Palestinian casualties according to civilians or combatants. In most but not all cases, the organization’s detailed list of Palestinian casualties classifies each person as “Killed when participating in hostilities” or “Did not participate in hostilities when killed.” Clearly, those in the latter category are not necessarily civilians, as a terrorist could be killed while, for instance, not directly in the process of planting a bomb or shooting a soldier. Moreover, B’Tselem almost never includes any reference to terrorist affiliations of Palestinian casualties, making it impossible for readers to know who was genuinely a civilian and who was not.
As CAMERA had done for 2006, a detailed review was conducted of B’Tselem’s data for the months of November and December 2007. Multiple inconsistencies and irregularities were found, some of which were continuations of last year’s questionable methodology, including the organization’s discounting of contradictory information from Israeli and Arab sources pointing to individuals’ involvement in hostilities at the time of their death as well as the failure to identify terrorist affiliations.
There were also new problems. For example, the death of an 11-year-old boy killed in Fatah-Hamas clashes is blamed on Israel, while B’Tselem leaves out the killing of two Palestinians, who according to even Palestinian sources, were Al Aqsa Martyrs Brigades members attempting to infiltrate into Israel.
For the November-December 2007 period, B’Tselem identifies 92 Palestinians killed by Israeli security forces in the West Bank and Gaza Strip, of which 57 (62 percent) are identified as “Killed when participating in hostilities,” and 23 (25 percent) are identified as “did not participate in hostilities when killed.” The rest – 12 (13 percent) – were not labelled as either participating in hostilities or not when killed.