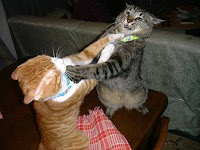 Oh man…..or oh Cat woman, the international jihad is coming apart. Hopefully.
Dubai, 8 Sept. (AKI) – Iran is accused of “collaborating” with the US in its occupation of Afghanistan and Iraq, in a new video message released by the media arm of Al-Qaeda.The video entitled, ‘Assessment of Seven Years of Crusades’ was produced by the media arm, Al-Sahab, and features messages from Ayman al-Zawahiri, Al-Qaeda’s deputy leader, and other commanders.Released three days before the anniversary of the 11 September 2001 attacks on the United States, the 90-minute video also attacks Lebanese, Pakistani and Afghan leaders.
According to the Arab television network, Al-Jazeera, al-Zawahiri speaks of the particular role of Iran and what he calls “the crusade campaign against Muslim countries” and the “Iranian-Crusade” alliance that enabled the US to occupy Iraq.” The Muslim leaders of Teheran collaborate with the Americans in the occupation of Iraq and Afghanistan, recognising the two collaborating governments that have left these countries,” he says. Criticising what he called “two faced” Iran in its ambiguous relationship with the US, the Egyptian doctor also criticises Iraqi Shia clerics and the Lebanese Shia militant group, Hezbollah.
“Hezbollah has not obtained any victory in Lebanon against Israel,” he says.”The bizarre and ridiculous thing is that Hassan Nasrallah (Hezbollah leader) celebrates this victory every year, but we ask: victory for what?
Cat fight …cat fight, cat fight…go at it boys…shove that testosterone around a bit, show whose boss! Do some surgical strikes against the other, or just plain, wipe each other out! Please do! KGS