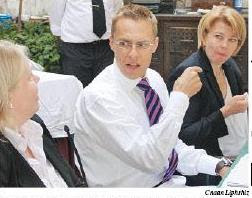 The Tundra Tabloids was called upon by Cnaan Liphshiz of the Haaretz, to give an opinion of Finland’s new Foreign Minister, Alexander Stubb, for an interview he conducted with the Finnish FM during his visit to Israel.
The TT was both mentioned and quoted in the article in the following way:
“editor of the influential Tundra Tabloids blog on Islamist radicalism in Scandinavia and prominent Israel advocate in Finland, told Anglo File he considers Stubb’s nomination “a step in the right direction [for] a more balanced, nuanced view” of Israel.
How true. For Europe, being “balanced between the both sides”, is all that one could hope for in a top level European government official. Finland’s former Foreign Minister, Erkki Tuomioja (SDP), was a well known critic of Israel, who was nowhere near the balance that Alexander Stubb is guaranteeing to show the Israelis and Palestinians. The Tundra Tabloids would of course settle for a European “John Bolton” as a foreign minister any day of the week. Finnish FM Alexander Stubb’s statement:
“The basic message from Finland is support for the peace process in all its forms, Stubb said. That’s why we don’t blame any of the parties,” he said. “I am not in the business of pointing fingers at anyone or making moral judgments. This is the first time in my life that I’m traveling to the region.”
Starting out in his position as Finland’s top man in the Foreign Ministry, I can understand such statements. But the time will come when the Palestinians will resort to their “business as usual” mode of operations, -terrorism in general, incitement of Jews in the mosques etc, which cannot be brushed aside or looked at between the fingers.
The TT has repeatedly spoken about the need to hold the Palestinians to the same requirements expected from Israel. Treating the Palestinians as adults is a giant step in the right direction, hopefully Finland’s top man at the Foreign Ministry, is in fact, the right man at the right time. KGS
Special thanks to Cnaan Liphshiz for the honorable mention. KGS
NOTE: I can’t help but relish the statements by Israel’s ambassador to Finland, Avi Granot, who spoke of the former Finnish FM, Erkki Tuomioja in the following way in the same Haaretz article:
“The significant switch in Finnish-Israeli relations came after the 2007 national parliamentary elections, after Stubb’s party beat Tuomioja’s Social Democratic Party, whose approach to Israel was a direct continuation of Finland’s foreign policy from the1960s,” Granot concluded.”
HAHAHAHAHAHAHAHA
How true. “Eki” is a dye-in-the-wool socialist of the 60’s variety, whose only response to anything related to Israel is: “Occupation”. Efraim Karsh easily laid Tuomioja’s claims to rest, in an article he wrote which is still viewable over at the JCPA. The TT has great respect for Karsh, who is the very essence of what a scholar should be.