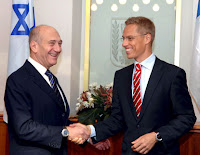 Finnish FM, Alexander Stubb met with Israeli PM, Ehud Olmert yesterday during his first visit to Israel. The Tundra Tabloids believes that Stubb marks a clear departure from the past “foul and very bitter politics” of his predecessor, Erkki “Ol’ Scruffy” Tuomioja.

A little bird has informed the Tundra Tabloids that Stubb will be interviewed by the Haaretz this morning, it’s believed that the journalist will take note of the differences between the past and present Finnish FM’s. The TT does believe that there is a new “more balanced” view of the ME within the halls of the Finnish Foreign Ministry. At least that’s the hope being expressed here in Finland. KGS

UPDATE: Al Avai comments: “I’m sure you saw images of Stubb’s visit to Jerusalem on YLE1 at 20.30 last night. YLE couldn’t help falling into the tried-and-true approach: show tefillin wearers at the Western Wall; interview a bearded rabbi, not an average guy on the street; show military vehicles. They could have shown the summer beaches, bikinis, windsurfers….”
Oh so true Al, it reflects the longing YLE has for the return of the status quo. For you see, they at YLE, actually miss Erkki “Ol’ Scruffy” Tuomioja, and his hateful “ankle biting” politics that he so proudly wears on the sleeve of his rumpled suit.