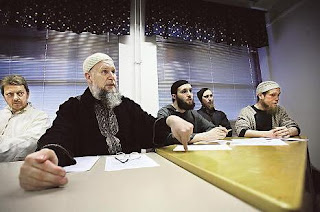 Just as Hitler defended ethnic Germans in the Sudetenland for their right to self determination, so to is Putin engineering a takeover of the autonomous Georgian regions of S.Ossetia and Abkahzia. The Russians are using every available means right now to get their propaganda into the public discourse, and yes, that means using tried and proven fools like Abdullah Tammi and the FIP. Something worth mulling over is, just how active is the KGB in promoting the Jihad or Islamic revival? Yes I know, the Russians have quashed Islamic attempts on their own turf, but it stands to reason that they would be willing to see the West engaged in a continual fight against it while they act freely in regain “lost territories”.