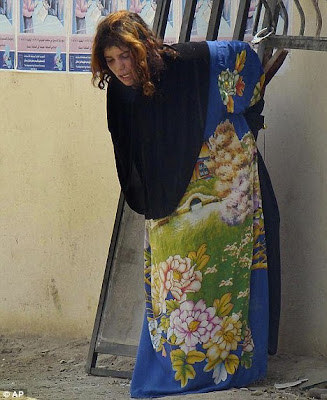 One of the other disgusting aspects to the story is that the poor girl was married at fifteen, then forced by her female relatives to wear the bomb vest. Dailymail: “Tears streaming down her face, she is confronted by police – a teenage girl apparently planning to blow herself up in front of an Iraqi school. The officers handcuffed her to a metal balustrade before moving in with extreme caution to uncover a vest full of explosives hidden under her colourful robe. The dramatic scenes were captured on a video shot by the police.The girl – thought to be around 15 years old – later said that she was given the bomb and told to wait outside the school for further instructions. In the footage, she denies trying to stage a suicide attack, and appears dazed, even drugged. She gave her first name as Rania and said she was born in 1993. Her exchange with the police offered a rare glimpse at a teenager allegedly recruited by insurgents. However, it was not clear to what extent her answers were given out of fear – of the police, or even of her own family.Police in Baqouba, where the girl was caught on Sunday, said she was fitted with the vest by female relatives of her husband, whom she married five months ago. They also claimed that the girl’s father was a suicide bomber, and her mother and one of her sisters were later arrested. However, U.S. sources said that the girl turned herself in after being hooked up to the explosives against her will. The police footage begins with Rania standing on the street. Her arms are already behind her back, where they have apparently been tied by an officer in an attempt to restrain her. A policeman is shown opening her robe, and later frames show her wearing what appears to be a suicide vest, containing about 33lb of explosives.”Pure evil. KGS