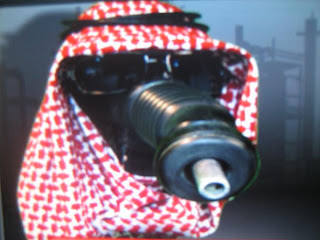 Over at Jihad Watch the following article was posted: “Gulf States to rake in $562 billion in oil money“.
JW: Financial Jihad: this will free up a billion or two for dawah and other stealth jihad activity in the West. “Gulf States To Earn Record USD 562 Billion In Revenue,” from ANSAmed, August 22 (thanks to Insubria):
DUBAI, AUGUST 22 – “Gulf oil producers are expected to earn a record $562 billion in 2008 as crude prices are projected to remain above $100 and they are pumping at one of their highest levels, according to new data from the London-based Centre for Global Energy Studies (CGES), reported by Wam news agency.
Accordingly, the combined oil export earnings of the six Gulf Cooperation Council (GCC) countries will soar to their highest level of $562 billion this year. The UAE’s income will swell to an all-time high of $97 billion while that of Saudi Arabia will surge to $307 billion and that of Qatar and Kuwait will peak at $89 billion and $32 billion respectively. The income, it added, is nearly $234 billion above their 2007 revenues of $328 billion and more than four times their earnings of $137 billion in 2003….”
I can think of no better reason to get the term “FLEX FUEL” into the daily lexicon of public discourse concerning rising fuel costs. Blogger TINSC has recently posted an essay on the myth that increased ethanol production (one major contributor to the Flex Fuel line of alternative fuels) is decreasing the nation’s food supplies. TINSC shows why that myth is indeed “a myth”, and emphasises that the US Congress needs to pass the Open Fuels Standard Act of 2008 and make every car sold in America capable of running on any blend of gasoline or alcohol.
We (here in Europe as well as in the US) should be aggressively pursuing the use of alternative fuels like, methane, ethanol and any other type of alcohol based fuels. Defeating the jihadis at the fuel pumps is the wisest of proposals currently being discussed today. Giving the consumer a choice of which fuels to power their motor vehicles, will in the end, deprive the Arab oil states of their enormous oil revenue which helps feed the jihad -both violent and non-violent version- against the West. It’s that simple. KGS