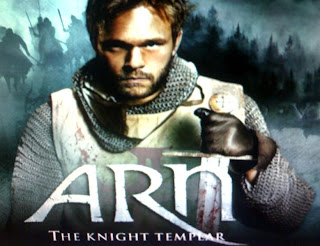 A Swedish knight travels to Palestine to take part in the crusades and discovers the goodness of Saladin. Ethnic self hate, historical revisionism and multiculturalist propaganda you say?

Well if the movie stays true to the story line available here, we are in, for yet, another Kingdom of Heaven revisionist spectacle, that revises the historical record in order to perpetuate the political version of “what should have been” had the multiculturalists had been around at the time.

But wait, this time around, it’s coming to you from the heart of Sweden, that Nordic bastion of multiculturalism, where even waving the Swedish flag can be taken as a racist act.

At the age of 27, Arn is already a veteran in the Crusader army, when he faces the strangest experience a Knight Templar can have. While pursuing a band of saracen thieves, he comes across the very enemy of all Christianhood, Saladin, and saves his life. After this, both become very close friends, but great enemies at the same time. After a series of unimportant battles, Saladin seizes the city and fortress of Gaza, where Arn served as commander. Saladin spares Arn’s life, while willing to get a bigger prize, the city of Jerusalem. Arn is given the order to march with all his knights, and they finally defeat Saladin’s army at the Battle of Montgisard. When Arnaud de Toroge is named Grand Master of the Knights Templar, Arn is summoned to Jerusalem to become Master of the city.In the Battle of Hattin, Arn is severely wounded and spends several weeks at Saladin’s hospital in Damascus, after that he accompanies him to Jerusalem, which is conquered (1187). In the very end of the second book, Richard the Lionheart comes to Palestine with an army of crusaders. He captures Acre from Saladin, and when about to buy off 5,700 prisoners from the Christian, Saladin and Arn horrified see Richard having them slaughtered, even the children “as the mamluks were riding, trying to save them, in tears“. Arn then confides that Richard “only will be remembered as the slaughter” and that he will never capture Jerusalem, thus confiding himself that he doesn’t care if the city remains in Muslim hands. He embraces Saladin, and then starts traveling home to Sweden, where a state is about to be formed.

OH Puhleeeze. Gag, cough, wheeze and choke. What a wagon load of dung, piles thick and covered with flies. Saladin the saviour, the enlightened one, the kind hearted. With so mush soft pedaling of the character, it’s surprising that the Muslim warlord even carried a sword at all.
I wonder if the PC multicultis overlooked that one, or would it have been too noticeable if the “great Saladin” was seen only carrying around a bouquet of flowers whispering “I bequeath peace unto thee”.
The reason I blog on it is due to a review I saw today on Finnish TV, in which both of the movie critics gave the flick 4 stars and glowing reviews. Perhaps there are good aspects to the movie (that I haven’t seen yet) that take place outside of the Levant. But as I stated before, if the movie follows the story line, then it’s just one more multiculti movie that wants to re-invent history to suit present day PC politics. KGS
NOTE: The trailer to the movie can be found here.