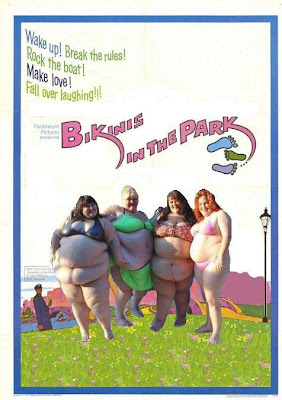 Those of you who think that we in the Counter-Jihad are guilty of over playing the threat that Islam poses to our western culture and way of life, take a look at this one, originally posted at Jussi K Niemelä’s blog
“Mother forbidden to wear bikini in play park”
A Helsinki mother was taking in the sun in the
Tapuli residential park in Tapaninkylä with her two sons, ages 5 and 6. While the boys were splashing in the swimming pool the mother decided to get some sun. She spread her blanket on the grass by the pool, so she could keep an eye on the children.
The mother managed to lied down only for a second, when a member of the park’s staff, a woman, came over and admonished her to dress up. According to the woman an adult is not allowed to be in the park in a bikini.

Why can’t someone get a tan in a play park, director in charge of parks, Leena Timonen? “During the play parks Summer operations all children wear swim wear. It has been agreed about adults, that the staff observe that their dress is also appropriate. Bikinis are not explicitly forbidden, but a bare upper body and string bikinis are not allowed, for moderation. Every staff member interprets for himself what is appropriate.”Who has created the rules? “This was jointly done between the play park-staff and family-center directors, that all parks would follow the same rules. We have a lot immigrants, for whom too much revealing clothing would offend. But not one rule was made because of them.”How often do you have to give notices to under-dressed parents? “I have not heard any situation like this before. Mostly it’s giving notice to those who have gone into the pool with clothes on.”What kind of fine would be levied for those who refuse to obey? “The police will not be called. It’s quite understandable that this kind of situation happened now that it’s hot. The adults have to understand that this is a child’s play park, and a standard of good taste has to be observed.”The woman being interviewed, Leena Timonen, is simply being disingenuous. She just can’t come out and say that it’s actually Islam that is in question, and that immigrant Muslims are dictating to the park officials what is appropriate to wear, and what is not. Children could care less whether a mom is wearing a bikini, or a tank top and shorts. It’s only a matter of time when the mother of two, besides being forbidden to wear a bikini, will have to bring her two boys to the pool at the gender correct time. The more non-Muslims cave into the whining of the Muslims, the more our own western culture and freedoms are going to be infringed upon.

Since the park director leaves the decision of “what’s appropriate” to the park staff, therefore it would be interesting to know just how many of the park staff are in fact, Muslims themselves? The whole situation is pretty bizarre, especially from a Finnish perspective, due to the Finns own sauna culture.

Depending upon how the Finns react to future demands coming from the Muslim sector of society, it is very possible that public saunas will be affected as well.

In the event that Finns will be forced to “cover up” in public sauna facilities, it could then even affect private summer cottages as Muslim families buy summer cottages along the shores of Finnish lakes and coastal areas. 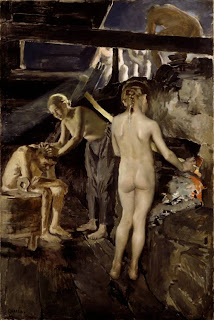 Finns, who have long had the custom of walking from their sauna naked to take a dip in the cool lake, will find themselves being forced into wearing a bathing suit in order not to “offend” their Muslim neighbors.
Hopefully it doesn’t come to that, but all the warning signs are there. *L* KGS