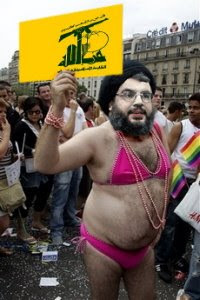 Visiting one of my favorite bloggers, Magdeburger Joe (also known as Magdeburger Chossid), I came across a post of his “Truth Spoken in Jest“. It’s a pretty thought provoking piece, especially in light of the recent prisoner exchange between Israel and the Hezbollah.

Israel recently obtained the bones of two of its soldiers kidnapped by the Hezbollah terrorists, for the return of five very alive prisoners- that freed Samir Kuntar, the cold blooded (an unrepentant) murderer of Israeli citizens, including a four year old girl.

Also thought provoking is an article by Prof.Barry Rubin, who takes notice of the fact that, releasing terrorist prisoners from Israeli jails will come with a heavy price tag:

Barry Rubin: “What is unforgivable in the deal itself was to include Palestinian prisoners. This was certainly unnecessary–would Hizballah reject getting its own men back?–and signals Palestinians that Hizballah (and hence Iran and Syria) are their true guardians.

As a Hizballah statement put it, “Our prisoners are freed not by words and not by diplomacy or tears and kisses….” In other words, support Hamas, not the PA; back terrorist groups, not Arab relative moderates; follow Iran, not Egypt.

A PA official told Ynet: “Everyone today knows that Israel only understands force. Prisoners, we see again, can only be freed by pressuring Israel and not through negotiations.” Typically, the official ignores the hundreds of Palestinian prisoners who have been freed due to past talks, only to be replaced by new ones as terrorism continued. One more example of how concessions bring neither sympathy nor moderation.

Hizballah, of course, will now move to the next item on its list, a small area of Syria which it claims is Lebanese occupied territory. Hizballah, and Hamas, probably even Fatah) will try to take more Israeli hostages and continue the cycle. Yet while it seems obvious to say that such an exchange encourages them to do so, the truth is that they would act this way any way.

So was the prisoner exchange the wrong thing to do? On one hand, there is an element of pride knowing government is responsive to individual citizens’ demands, but on the other hand there is a strategic cost to be paid for such a policy.”

Rubin’s observations dovetails with the video depicting Hezbollah never being satisfied with any gains it achieves, they will always be emboldened for more. Every concession made to these Islamist religious supremacists -whether in Beirut, Gaza, Ramallah or Tehran- will be taken as sign of the invincibility of Islam and the weakness of its enemies, why anyone thinks they can ever be “won over” is beyond me. More here. *L* KGS