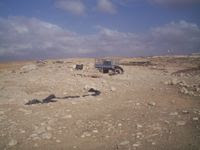 In one of the more noticeable articles paying homage to Palestinian propagandizing, the Central Finland newspaper, The Keskisuomalainen hits a new low. An IPS news agency article: Sewage in Water Threatens Gazans was published (in part) in today’s edition of the paper, which completely distorts the events leading to the present day sewage mess in Gaza.

Heads up, here comes all the boo hoo hoo:

“On the ground Israel’s closure has translated into a lack of fuel, electricity and spare parts needed to operate waste water and sewerage treatment plants.”

But wait! Stuart Shepherd, the UN’s humanitarian aid officer in Gaza -after the sewage flood in March of last year- saidthat:

“the Umm al-Naser plant had not been affected by the aid boycott, noting there had long been warnings about the plant. A UN report in 2004 had warned that the sewage facility was at its maximum capacity, and flooding was inevitable unless a new waste treatment plant was constructed. Mr Shepherd said foreign investment had been secured to build the treatment plant, but construction had not gone ahead because of security risks in the area. “

So the actual truth here, is that due to Hamas’ interest in diverting funds into its own infrastructure -to better the lives of its own people- they chose to squander it elsewhere, meaning weapons, missiles and explosives. They have known about the mess they have created, and for strategy purposes alone, will use it as a PR weapon against Israel. IPS journalist (if you can even call him that) Mel Frykberg was more than willing to help out.

Here’s another steaming pile laid by the activist journalist:

“Following Hamas’ takeover in Gaza last year, after it won legislative elections in 2006, Israel designated the densely populated strip of 360 square kilometres hostile territory and sealed off the borders, enforcing an embargo which is supported by the international community.”

As I stated earlier, the Finnish paper republished a shortened version, which subsequently spared us from more of the same highly politically charged nonsense. But for those people who know little about the situation other than what they read in the local papers, the damage that is done is immense. In short, it’s called activist journalism, and for (choke, gag, wheeze) journalists like Mel Fyrkberg, it’s an honour to hate & fight Israel through his pen. What a turd. *L* KGS