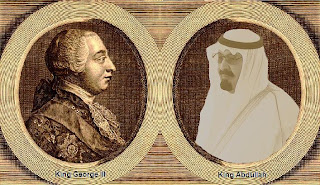 The names of the kings have changed as well as the region from where they rule(d), but after 232 years, America still finds itself under the grip of a foreign tyrant king.

The Tundra Tabloids’ good friend, TINSC, posts an interesting comment at his blog concerning America’s Independence Day. It bears keeping in mind every time you fill up the gas tank of your car.

TINSC: “In keeping with the tradition of our founding fathers, let us remember their reason for seeking independence: TAXATION WITHOUT REPRESENTATION IS TYRANNY.

So today, let us all rebel against the evil King from a far off land who has mercilessly taxed the American people through an illegal OPEC cartel: King Abdullah. And if you or anyone thinks that the situation is different or the stakes aren’t the same, think again! America is being taxed by an evil King from far off shores and it is our duty to rebel and set America free again.”

TINSC is right of course. The US is being manipulated by a foreign power that claims to be both a friend and allie, but whose actions continuously serve to undermine both the economic integrity and social fabric of the US. The Saudis are awash with money and the influence it brings, and have been busy subverting the US through every level of its society.

The Saudis not only produced the gang of terrorists that plowed into the WTC and the Pentagon, but also are behind the funding of the same intolerant racist ideology that drove the gang of terrorists to murder American citizens on 9/11. The Saudis are busy funding the building of mosques throughout the US that will be used to subvert it, while pedaling their influence in the halls of US government in order to own it.

The only political force keeping the Saudis at bey at the present time, are the sea of voices coming from the grass roots level from within the US that support the only democracy in the Middle East, Israel. If not for the American affection and solidarity for a fellow democracy, the situation in the US would be far worse than it is today. Those Americans who both approve and promote the US-Israeli alliance have been warning for decades about the dangers the Saudis pose to western freedoms. We can’t afford not to listen.

It’s never a good thing to allow a foreign power to hold sway over your own financial and economic system, the Saudis are doing both (as well as the Chinese). While the US pays over a $140 US dollars for a barrel of oil that costs only a $1.50 to pump out of the ground, the US continues to fund the Islamic jihad that is raging against it. Time to put an end to this nonsense once and for all. *L* KGS

NOTE: I look forward to reading more what TINSC has to say about this important subject in the near future. To learn more about the need to divest from Saudi oil, click here.