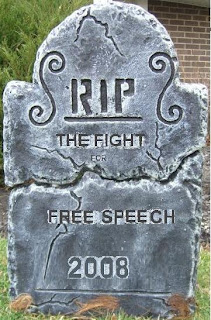 Robert Spencer writes in the FPM about the recent backward step by the international community, in the strangling of free speech. Its called “IslamOprotectionism”, that seeks to keep itself from being scrutinized on the public stage.

The fact is, the IslamOcrowd can’t help but engage in such high handed thuggery, otherwise they would be shown for what they really are, and would be forced to change. And they can’t have that can they?

Robert Spencer: The war against free speech is advancing rapidly: Associated Press reported Thursday that “Muslim countries have won a battle to prevent Islam from being criticised during debates by the UN Human Rights Council.” Council President Doru-Romulus Costea explained that religious issues can be “very complex, very sensitive and very intense…This council is not prepared to discuss religious matters in depth, consequently we should not do it.” Henceforth only religious scholars would be permitted to broach them,

“While Costea’s ban applies to all religions,” AP explained, “it was prompted by Muslim countries complaining about references to Islam.” The ban came after a heated session on Monday, when the representative of the Association for World Education (AWE), in a joint statement with the International Humanist and Ethical Union, denounced female genital mutilation, the penalty of stoning for adultery and child marriage as sanctioned by Islamic law.

Egypt, Pakistan and Iran angrily protested, interrupting the AWE speaker, David Littman, with no less than 16 points of order, and succeeding in getting the Council’s proceedings suspended for over half an hour. In the course of this contentious discussion, the representatives from the Islamic countries made numerous revealing statements – statements that are well worth examining as Islamic nations and organizations call with increasing insistence for restrictions on free speech in the West.”

The whole UN stinks to the core, and should be disbanded with a new institution, the UNITED LEAGUE OF DEMOCRATIC STATES rising in its place. Such tomfoolery that was on display in the UN Human Rights Council would be done away with by such a new insitution, seeing that all of the Muslim states would be excluded due to their not being able to meet the full democratic requirements of the ULDS to gain entrance. Face it, the UN is a counterproductive organization due to being manipulated by some pretty unsavory regimes. Time to get out of it once and for all. More here. *L* KGS

NOTE: The Tundra Tabloids had the pleasure of being in the presence of David Littman on a few occassions, and found him to be not only a brilliant man, but also a honest and sincere individual who truly cares for human rights for all, whether they be Christian, Jew or Muslim or from any other faith or secular.