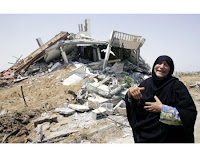 The terrorists in Gaza, who are allowed by their parent terrorist organization Hamas to launch rockets into Israel, could care less whether their actions will lead to the death of their citizens. It’s disgusting, but it’s that simple, they look at their own people as cannon fodder for the international media.
The terrorists love to show their fake grief to the world over the death of their own civilians -whom they purposely place in harms way- while at the same time they target Israeli civilians with death and destruction.

Earlier today, the IDF was responding to a barrage of Qassam rockets that were being fired out of Gaza into Israel, by sending in a team of soldiers to ferret out the terrorists who were responsible for the launchings. What happened next is of course regrettable as it was predictable, but nonetheless unavoidable as long as Palestinian terrorists use their own people as human shields.

J’lem Post: “Palestinian officials say a six-year-old girl has been killed by IDF tank fire in Gaza. Another two people were being treated for injuries sustained in the shelling, Dr. Moaiya Hassanain, a Palestinian Health Ministry official, said. The military said they had opened fire early Wednesday at gunmen launching rockets into Israel. The incident occurred near the border where terrorists fired 30 rockets into Israel on Tuesday, the military said.”

The picture on what really happened will become more clear once the IDF has conducted its thorough investigation into the incident. But rest assured, the Palestinians will never conduct a similar investigation, because they employ a propaganda driven strategy that is focused on getting images disseminated into the media. They will never ask the hard questions as to why their men were launching rockets from the front yard of someones house.

So the Palestinian strategies are well known, the question remains however, why is it that the international media seems prone to over look that strategy and report the news in such a superficial way? That is the question any person reading this blog should ask him or herself when reading or watching the news reports on the Israeli/Palestinian conflict. Why is it, that the media never takes to task the Palestinian governmental officials reluctance to condemn their own personnel cynical use of their own people?

That’s the main story here. The failure of the media to recognize (admit) the propaganda war being waged by the Palestinians, which depends upon the loss of life of their own people, like the young girl, is the story yet to be reported on in any meaningful way by the Finnish and/or international media. By default, through their own biases, have placed themselves smack in the middle of the conflict as participants, and not as objective observers. *L* KGS