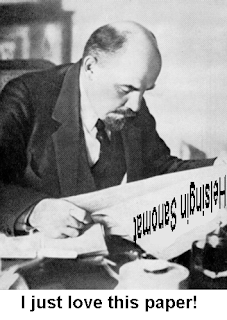 The Helsingin Sanomat’s editorial page (subscription only) contains a whopper of an editorial, in which the Finnish capital’s paper labels the Irish “the cuckoo birds of the EU” if they vote no in tomorrow’s referendum vote on the Lisbon Treaty.
In one of the most arrogant and highly disingenuous editorials that paper has published in recent history, the paper pretends that democracy will be subverted by, get this, the Irish voters themselves if they fail in ratifying the (98% unchanged) EU constitution renamed as the Lisbon Treaty.

Read it in full!

HS: The Finnish parliament voted, and the Irish people will decide.

If a national referendum on the EU-organizational revamped Lisbon Treaty was now arranged in Finland, what would we vote? More than likely we would be thinking about election funding and morals of our elected representatives. (Finnish politics is currently experiencing a scandal). What do these matters have anything to do with the functions of the EU and its necessary changes? Absolutely nothing.

Ireland is the only EU-country which is asking directly from its people their approval of the renewed agreement. Finland’s decision is different, the parliament decides today in a second round of voting the Finnish position. Ireland’s referendum is set to take place tomorrow. According to the polls, the opponents of the treaty are as great as those who support it. The majority of the Irish have announced that they should think of the treaty. 20-40% of those polled couldn’t define their own positions.

[TT: The reason why the average Finn would be thinking of other issues, would be due to the failure of the Finnish political elite and the media, in ensuring that the Finnish public was well versed in all important aspects to the Lisbon Treaty. That means both positive and negative points in the treaty. The Finnish government failed its citizens by rejecting an open and honest debate about the treaty, choosing rather to treat its citizens as fools. The tone of this HS op-ed reflects that arrogant mindset.]

This group is easy to understand. EU’s reform has been hashed back and forth. The agreement (original) had offered a flag, hymn and labeled as a constitution. It was voted on in France and in Holland and the whole project fell. It was repaired, patched and stricken of its flag and titles. It demands quite a citizen activism and abundant curiosity to ascertain, what the Lisbon Treaty says, how it differentiates from the “constitution” and what it changes. Especially when the average persons daily life isn’t moved one way or the other, whether the treaty is approved or not. 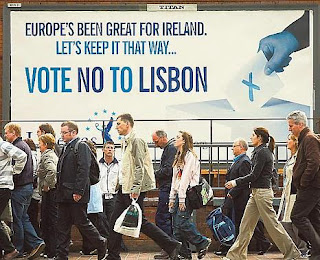 [TT: Again, if not for the arrogance of the political leadership as well as the EU lap-dog mentality of the media, both the Irish and Finnish public would indeed be well enough informed about the major pros and cons about the treaty. The EU minded political elite in both states as well as elsewhere, feign concern in “getting the message out”, but fail the people time and again in approaching the major issues from all opposing viewpoints, like in the Helsingin Sanomat]

In the end the Irish will be also voting on whether they trust their national decision makers or not. This trust will again rest upon -if it does- mainly on entirely other issues than the decision makers actions in the EU’s reform work process. Just a year ago this same kind of agreement was deemed to be in Ireland as a sure deal. The country has benefited greatly from EU-membership. membership has brought investment, subsidies and economic growth, which has reflected strongly on their support for EU-membership.

[TT: The fault lies not with the people, but with the government itself, for failing to encourage the people to get involved, as well as the encouraging all the different viewpoints to be aired in public debates and in the media’s editorial and opinion-editorial pages.]

Now the national credit recession has hit rock bottom, growth is slowing, housing is depreciating and uncertainty is on the rise. What If for example Finland were to vote now about campaign funding, Ireland votes about what it thinks of the sharp drop in its economic climb and what kind of fears this change of direction brings.

Brussels’ decision makers have tried to walk softly, so as not to increase Irish fears. For an example the mulling over a general business tax base has advanced to the first stage, so that the advantageous taxation of the state wouldn’t be endangered.

Other parts of Europe will follow Ireland tomorrow with anxiety: one percent of the continents 490 million people will decide, will the EU’s reform treaty be good for Europe. European EU-critics have of course noticed this and have offered help to support the “no-camp”. These assistants have remembered that only in Ireland is democracy being carried out, while others fled from the people’s vote. But what kind of democracy is this, in which the Finnish parliament’s -and many other state parliaments- is nullified, if only one state, the EU’s cuckoo bird says no to the treaty?

TT: How “Sovietesque” can a western newspaper get? I can think of no starker example of Leninist/Stalinist thinking, than the thought that those who dare to speak up and voice a different opinion than that of the government’s,….are mentally off balanced. If Ireland will be the cuckoo bird of the EU for having voted against the EU’s Lisbon Treaty/EU constitution, then that makes these pro-Eurocrats (who are willing to hand over its sovereignty to a political entity no one would want to have on the national level) stark raving mad, lunatic imbeciles. *L* KGS