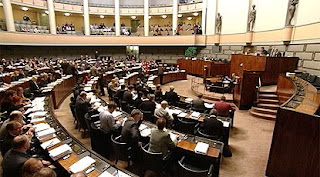 The vote was 151-27 in favor of tearing to shreds its own constitution, with only the Irish standing in the gap between national political suicide and maintaining its own sovereignty.

YLE: Finland has approved the Lisbon Treaty by a large majority. The treaty will replace the failed EU constitution. 151 of 200 parliamentarians voted for the treaty while 27 opposed it and 21 were absent. The treaty is expected to come into force early next year, but requires approval from all EU member states.

Opponents to the treaty have criticised the lack of public discussion surrounding the treaty, as well as the failure of the government to take up the issue.Ireland will hold a referendum on the treaty on Thursday. All other EU states’ parliaments will decide the issue.

But when push comes to shove, do the Finnish people and the representatives they elected into power really deserve a second reprieve? Don’t we deserve the insanity that has been approved today in the Finnish parliament?

This whole situation stinks, and to think that this “electorial coupe” took place without any noticeable verbal shot being fired across the public’s bow. The state run television media YLE, never even considered running a series of public televised debates about the pros and cons of transferring Finnish sovereignty to Brussels. They were in on the fix.

I am going outside now and run my flag at half mast, and if anyone asks: Has someone died? I’ll answer yes, the Finnish constitution and our sovereignty. 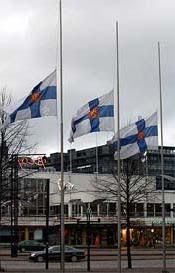 The Baron posted the following yesterday, and because it centers squarely on what has happened today here in Finland, I’ll republish it here. Baron Bodissey of course always gives the TT free republication rights, so here it is in full. A Multicultural Utopian Idea
by Baron BodisseyFjordman drew my attention to this editorial, part of which Steen posted (in Danish) a couple of days ago at Snaphanen. It was written by Lone Nørgaard for Sunday’s Jyllands-Posten, and kindly translated for Gates of Vienna by our stalwart Danish correspondent Skjoldungen.Editorial: That’s why we are not allowed a referendum on the Lisbon TreatyWhat worries me most is the fact that the Lisbon Treaty is guided by a multicultural Utopian idea whose purpose is to put an end to the national state, writes Lone NørgaardI am extremely sorry that we are not allowed a referendum on the Lisbon Treaty. I would have preferred either a rejection or a confirmation preceded by a debate about whether the constitution’s father, Valéry Giscard d’Estaing, is right when he in an open letter to European newspapers writes:“The content of the Lisbon Treaty does not differ from the Constitutional Treaty, only the form has changed. The lawyers from the European Council used the usual procedure: Earlier treaties are changed by amending proposals and the Lisbon Treaty thus stands as a catalogue of amendments to preceding treaties. It is unreadable for the citizens, who are forced back to the Rome and Maastricht treaties in order to understand the new one. As far as the content is concerned the “the old” Constitutional Treaty’s institutional proposals can be rediscovered in their entirety in the Lisbon Treaty, just in a different order. The conclusion is that the tools of the Lisbon Treaty are exactly the same as the tools in the Constitutional Treaty, namely the treaty the Frenchmen voted down. The only difference is the compartments in the toolbox.”Does that mean there is no difference at all? Yes, apart from the fact that the words “Constitution” and the adjective “constitutional” are absent and the Union’s symbols are left out. The big idea about this sophisticated manoeuvre [manipulation?? — LN] is to avoid a referendum, while at the same time spreading the constitutional articles all over the Lisbon Treaty, just “tidied up for constitutional phrases”.So much about Giscard d’Estaing. His statements can be supplemented by:

– – – – – – – – -Accordingly Denmark will be reduced to a “state” (in the American sense) when the Lisbon Treaty is implemented. In a union of real states those states themselves decide what the common institutions can do. Until now the EU has been such a union. By implementing the Lisbon Treaty we will have a state-union, where the sovereignty lies with the central government. Here, decisions are made by majority rule. This means that the Danish government can be overruled by others in any political matter. For example, Italy’s new precautions against criminal immigrants could probably be overruled and made illegal by higher EU-authorities.In that way power is taken further away from national parliaments and delegated to the EU Court, for instance. And one should note that judgements are made by humans. Justice is something created by humans, not a Divine gift. Justice proper lies with the judge, not outside the law. Interpretations of laws are never objective by nature. But when the verdict is over, the judges themselves cannot be held responsible for their interpretations. In other words: The court judges and by doing so sets precedents by interpretations, but later on, the judges are cleared of any responsibility with regard to their interpretations and political motives. That is alarming.What worries me most is that the Lisbon Treaty is guided by a multicultural Utopian idea, whose purpose is to put an end to the national state. In that respect the Muslim immigration into western Europe is a consequence of EU’s cooperation with the Arab world. Following France’s defeat in Algeria in 1962 its president, Charles de Gaulle, fostered an idea of an alliance between Europe and a slew of Arab states.The purpose of this idea was — among others — to counter the influence of the USA. In 1974 a parliamentary body was established in order to strengthen the EU’s political, cultural and economical ties to the Arab world.This body had members from 18 national parliaments, including the Danish Parliament and the European Parliament. Later on, it was augmented with a body known as The Euro-Arab Dialogue, which held a strong position in the then Common Market and later EU leadership. This dialogue-lobby propelled a pro-Arab foreign policy directed against Israel and the USA.Furthermore, it facilitated a permanent and massive Arab and Muslim presence in Europe by means of immigration and settlement of millions of persons from North Africa and Asia Minor. The orientalist Bat Ye’or writes that following French, German, and Belgian initiatives, numerous European institutions have facilitated such a development by means of cultural life, education and publishing. These initiatives have received support from universities in order to improve Islam’s reputation as much as possible.Several generations of Europe’s young people have already been educated with this pro-Arab ideology (source: “European Fears of the Gathering Jihad”, www.frontpagemagazine.com, 21/2 2003).Did that pan-European strategy contribute to the strange legislation that 20 years ago opened Denmark to family reunions, in a situation with almost a quarter of a million unemployed?The supra-national bureaucrats of the EU consider themselves experts and accordingly they don’t care one bit about the problems their great visions inflict upon the aboriginal populations. They want to enforce their multicultural union-state without interference from those people who will have to bear the painful consequences.So it becomes quite clear why we are not allowed a referendum on the Lisbon Treaty.