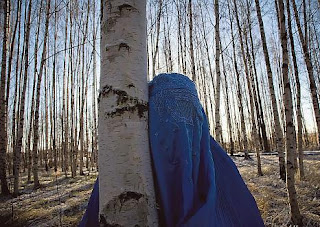 Finnish author, artist and student of anthropology, Rosa Liksom, wants to raise a debate about the Islamic Burka. But in doing so she smears a Christian sect in Finland “Lestadiolaisuus“, with the Taliban who favor demand their women folk to wear the full tent-like garment. Here are pictures showing how Lestadians dress.

HS: “Women in Finnish surroundings dressed in burkhas were immediately taken as a very political artistic statement. Rosa Liksom does not agree. “I was born in the far north, in a small village, where most of the people were members of the Conservative Laestadian sect. There women were always dressed in black, and they wore black scarves, showing only their faces.”

Well surprise surprise, comparing these two religious groups is like comparing apples and oranges, both are indeed round but entirely different from the other. The Lestadian sect is a branch of the Finnish Lutheran Church, very conservative and believe in large families. In all honesty, due to their efforts, Finland’s population would be much smaller than it is today.

This Christian sect does not impose themselves upon others and do not force their dress standards on their women through beatings and intimidation (they no longer wear that old style of dress anymore). The members are free to choose for themselves whether that life style is for them or not. Shame on the anthropologist/artist for comparing the Finnish sect with the Taliban, of which the latter do force themselves upon little boys. Liksom then lays another streaming pile:

Liksom”I thought what would fit with it as an element of alienation, and I came up with the burkha. Its blue colour calls to mind the Finnish flag. It is both graphic and figurative as a material.” “And naturally, it is something that raises powerful emotions”, Liksom adds. “Islam is so demonised in the West that I wanted to tame the burkha.”

Ok, another Nordic female enthralled with the supposed good qualities of the oppressive garment, but she does get one thing right, it does raise powerful emotions. The oppression of women in Muslim lands are not helped one bit by dunderheads like Liksom. Sure she can find some Muslim women who might defend the thing, but as long as there is “ONE” woman who feels oppressed by wearing it, that makes the garment one of oppression. Period.

It is only natural that some women -who know of nothing else but the wearing of such a thing- would behave like a beaten housewife and defend the thing that oppresses her. This is just another exercise in multi-culturalism hooey at the expense of our common sense. This artist knows fully well that she is making a political statement, otherwise she wouldn’t be stating that Islam is being demonized.

Guess what kind of art Liksom would never be caught doing? To artistically portray the Islamic world as being itself to blame for its own negative image, but that’s not a politically correct piece of art to do, unless you happen to be a certain Danish or Swedish cartoonist. More here at Fausta’s. *L* KGS 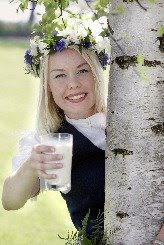 UPDATE! A reader informs the TT that : “Liksom is SUPPOSED TO BE A FEMINIST!!! Ha ha“

NOTE: The Tundra Tabloids had a gut feeling that was the case! Thanks for confirming it JK!!!