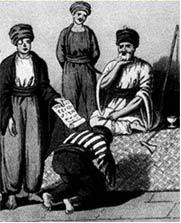 An exhibition about Christianity in Syria has opened today in Rome, organized by the Syrian Embassy. Of interest is the exhibition’s message of how Christianity and the adherents to the faith have fared vis-a-vis “tolerant Islam”.
ANSAmed “The exhibition includes fifty panels on which photos taken in Syria are placed depicting Christian sanctuaries, churches and monasteries which have challenged time and a tolerant Islam. The opening day will be attended by abbot of the monastery, Mauro Meacci, Ambassador of Syria, Samir Al Kassir, and director of Promex, Federico d’Errico.”
However, the certainly upbeat portrayal of Christians living wonderfully well in a majority Muslim Syrian state, is far from the truth, as reported by the Christian Solidarity International.
The historical process of Islamization has transformed Syria’s once thriving Christian majority into a small frightened community. Its existence is under threat. Syria’s Baath Party dictatorship is not as violent in its persecution of Christians as some other regimes and extremist Islamist movements in the region. Yet, the odds are stacked against the country’s intimidated Christians. According to the Syrian constitution, Islam is the ‘main source for legislation’.
Discrimination against non-Moslems is evidenced in the regime’s refusal, for the past 40 years, to grant permission for the opening of a single Christian school. Moreover in existing Christian schools, the law requires that the Principal be a Moslem. Sunday sermons in churches are routinely monitored by the secret police. Violence against Christians often goes unpunished.
The report goes on to describe incidents of violence against Syrian Christians that fail to interest the police. More here.
Here is more evidence that the situation of Muslim-Christian relations in Syria do not exceed the boundaries of business activity and superficial social transactions, which does not exactly create a great picture of peaceful coexistence and brotherly love. It’s another good reason why Muslim majority states are for the most part, “monocultural”, and that comes at the expence of those who do not happen to fit the mould. *L* KGS