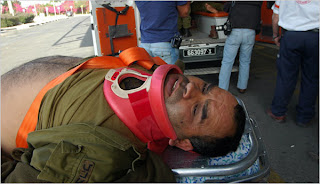 The Finnish Capital’s Main News Daily, Helsingin Sanomat, failed to report on the Palestinian triple suicide-homicide attack at the Kerem Shalom goods crossing this past Saturday.
On the eve of the high Jewish holiday of Pesach (Passover), Palestinians in the Hamas controlled area of Gaza, unleashed a coordinated homicide attack on an Israeli crossing station that is used to transport needed goods into Gaza.

The attack was devestating, with three of the Islamokazis killing themselves and wounding 13 Israeli soldiers. According to the New York Times that deemed the story news worthy enough to report,

Saturday’s attack on the Kerem Shalom terminal, from where essential goods are transferred into Gaza, appeared to be part of a concerted campaign by Gaza militants against the border crossings. Hamas officials have issued threats in recent weeks about an impending explosion along Gaza’s borders with Israel and Egypt. This attack was the fifth to have occurred along the border with Israel in the last 10 days, according to Maj. Avital Leibovich, an Israeli Army spokeswoman.

Israel has strictly limited the movement of people and goods in and out of Gaza since Hamas took control of the area last June, and since late last year has further restricted the flow of goods, including fuel supplies, as a sanction against continued rocket fire. With the passenger crossing on Gaza’s border with Egypt mostly closed, Gaza’s population of 1.5 million is completely reliant on goods allowed in from Israel.

About 200 trucks of essential food and medical supplies currently pass through Kerem Shalom each week. On Friday, 48 trucks delivered goods including wheelchairs, babies’ bottles, meat and fish, the military said. Israel says that by attacking the crossings, Hamas is trying to create a humanitarian crisis in Gaza that would lead to international pressure on Israel.

This is the story that the Helsingin Sanomat -which reports on the Arab-Israeli conflict every 1.3 days– chose not to report on, not even giving it a whiff of attention. The Helsinin Sanomat did in fact though, report on the Palestinian cameraman being killed during the fighting between Israel and Palestinian terrorists this past Thursday (17.04.08) in its online edition of the paper.

But they failed to do the same even in their online edition of the paper concerning the Palestinian attack against the Kerem Shalom crossing on Saturday. It’s pure bias by this news organization. What more proof does one need?

“A spokesman for the group’s military wing, Abu Obeidah, told reporters in Gaza that Saturday’s attack was “a gift for the people under siege” and warned that there is “worse to come.” Asked why Hamas was attacking the entry points when the population was in such dire need of supplies, he replied that Saturday’s attack was “a purely military operation.”
This is something that the HS apparently does not want the Finnish public to be aware about, that the Hamas, in spite of its being touted for its “social services” by the western media, could in fact, care less about the welfare of the average Arab living in its domain. *L* KGS
UPDATE: Al Avai chimes in: The embarassing thing for the Hesari (Helsingin Sanomat): “The armored personnel carriers used by Hamas on Saturday used to belong to the Fatah-dominated Palestinian Authority, which had acquired them with Israeli permission as part of past peace accords. Hamas seized the vehicles when it took over the strip, routing Fatah forces there.”