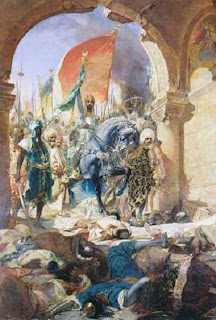 The need for the Islamic world to reform its religious scriptures could never be greater. A Front Page Mag symposium addresses the problems and dilemmas facing the reformists who seek to enact reform, while offering some some solutions of their own.
The highly problematic nature of the Qur’an, Sirah and the Hadiths give the guest panelists a lot to argue about, but no clear cut answers. Though the exchanges are rather winded, it’s still worth the time read it through in its entirety. Pay close attention to Bill Warner, Abul Kasem and Robert Spencer, they offer the best argumentation in the panel.
Warner:
First, let me establish the basis for my logic with regards to Islam. To Mr. Massoud, I say: I have no interest in whether there is no god, one god or a million gods. I also have no interest in whether the texts of Islam—Koran, Sira and Hadith (the Islamic Trilogy)—are accurate or false. For over a billion Muslims, the Trilogy is the basis of the doctrine of their life, politics and civilization. They believe the Trilogy to be true and live their lives by it.
, the Sira and the Hadith are of one cloth. They form an integrated and complete ideology. The logical perfection of the Trilogy is the reason that it has lasted so long. The other basis for my logic is that the reform be comprehensive and logical. We must have principles, not beautiful opinions.
Abul Kasem:
Nevertheless, I appreciate the efforts of Massoud and Thomas Haidon who sincerely want to reform Islam and bring it to conform to the current civilized world. They are genuinely appalled at the barbaric, cruel and inhuman aspects of Islam, largely emanating from the application Koran and ahadith. Unfortunately, history of Islam demonstrates that many such attempts in the past had been dismal failures, and there is very little prospect that such current attempts or future attempts will succeed. I might sound pessimistic, but Islamic history uncannily confirms that playing with Koran and ahadith is a dangerous game that is destined to failure.
[…]
What I disagree with Bill Warner is that, while he accepts that the Koran is reformable, I do not. I have already stated my reason/s why this is just not possible—the Koran completely forbids its reformation, and whoever attempts to do so will be murdered, Islamically.
Robert Spencer:
So how, then, can it be done, if it can be done at all? It is noteworthy that Mr. Haidon says that he would be “more attentive” to Mr. Massoud’s arguments if they more closely resembled those of Mahmoud Mohammed Taha, “who argued,” says Mr. Haidon, “from a historical and theological perspective that the Meccan verses of the Qur’an should effectively be removed.” Mr. Haidon clearly has in mind the Medinan verses, which Taha actually targeted, not the Meccan ones, but the main problem here is that for his views Taha himself was executed by the Sudanese government in 1985.
Abul Kasem is correct that most of the Qur’an-only Submitters “live in the western countries, for had they expressed their views in an Islamic paradise they would be certainly killed for tampering with the Koran.” Nothing is more certain than that those who attempt reform of Islamic doctrine in Muslim regions take their lives into their hands. One notorious example is that of Suliman Bashear, who “argued that Islam developed as a religion gradually rather than emerging fully formed from the mouth of the Prophet.” For this his Muslim students in the University of Nablus in the West Bank threw him out of a second-story window.