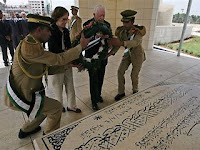 KUDOS to Michigan Rep. Joe Knollenberg, for his legislation that seeks the removal of state funding from the Carter Center!. (Edit: Knollenberg is a Hezbollah stooge, see below for more)

A U.S. lawmaker introduced legislation Wednesday to strip former President Jimmy Carter’s Georgia-based scholarly institution of taxpayer support because of Carter’s plans to meet with the top leaders of the Palestinian terror group Hamas. And a second lawmaker presented a non-binding resolution that would urge former presidents from “freelance diplomacy” in direct response to Carter’s visit.

The Tundra Tabloids expresses its heartfelt thanks to these lawmakers who have the moral courage and fortitude to do the right thing, and pull funding from the Hamas hugging ex-pres. Carter would be the main reason for such a law to prohibit freelance diplomacy, and it couldn’t come at a better time in history.

There is just too much at stake for ex-presidents to be embarking on their own (misguided in Carter’s case) adventures and reeking havoc in their wake, especially when they don’t have to answer to any constituency.

UPDATE: Debbie Schlussel tells the Tundra Tabloids that : He’s (Michigan Rep. Joe Knollenberg) Hezbollah’s fave Congressman who is about to lose his seat in a tough race. That’s why he’s doing this.”

So all that can be said is….right choice made by the wrong man. Thanks to Debbie for setting the issue straight! Debbie also states that she will be posting on this soon, so stay tuned! *L* KGS

UPDATE: Debbie Schlussel has the full scoop on this Michigan congressman, seems that not all what appears to be concerning the congressman’s sincerity about Carter’s foray in Middle East politics. according to Debbie, this guy is in the pocket of Hezbollah, or should I say that he feeds Hezbollah with American taxpayer dollars.
Thanks Debbie for clearing that up here, I’d hate to mislead my readers, that’s why it’s soo important to have people with inside knowledge of the local scene….blogging about what is really going on. Thanks again!
Hypocrite: Hezbollah’s Congressman Now Wants to Defund Carter on HAMAS
As long-time readers know, Knollenberg, who was my Congressman and whom I’ve known for many years, has a record of sending millions of your tax dollars to Hezbollah, and–in exchange–taking thousands of dollars from American Hezbollah frontman Nijad Fares and his pan-Hezbollah front, the American Task Force for Lebanon PAC. Fares’ father, Issam Fares, was the Hezbollah-installed Deputy Prime Minister of Lebanon, a perch from which he did Syria’s bidding.
Moreover, Knollenberg takes orders from Jim Zogby, head of the Arab American Institute, which successfully got Knollenberg to get $86 million in U.S. Aid for Southern Lebanon, all of which went to Hezbollah. Knollenberg also obtained millions of dollars in federal earmarks for the anti-Israel Arab American National Museum, which is not in his Congressional district. And he got millions in federal funding for the deceptively-named Seeds of Peace camp, founded by Yasser Arafat’s favorite biographer.
So why is Knollenberg now seeking to defund Carter for meeting with HAMAS?
Politics, my friends. Knollenberg is in the race of his life. His once-safely-Republican seat is now trending Democratic. His 2006 Dem opponent, Nancy Skinner, lost by a few hundred votes, even though she barely put on a campaign. His current Dem opponent–Gary Peters, whom I am endorsing, because he has not shown a penchant for Hezbollah–has raised hundreds of thousands of dollars and the Democratic Party, nationally, has targeted Knollenberg’s seat, which he’d hoped to hand over to his State Rep. son, Marty Knollenberg (who also got campaign cash from Hezbollah’s Nijad Fares).
My past writing on Knollenberg’s Hezbollah funding, etc. has been making the rounds. A lot of conservatives want to sit this out (Knollenberg is not a conservative and supports gay marriage, gay rights, etc.). And Knollenberg, previously a recipient of a lot of Jewish campaign donations in this district with a significant Jewish population, are now supporting his opponent, Peters.
So, now, Joe Knollenberg is pretending to be a tough-on-Islamic-terrorism with his bill to defund Jimmy Carter. It’s a win-win for him. He knows the bill will go absolutely nowhere in a Dem-controlled Congress, and he gets to go all over Detroit radio and TV–as he did yesterday on the Mitch Albom show–to sound like he’s against the same type of Islamic terrorism he’s been funding with your tax dollars for his entire career in Congress.
Don’t believe the hype. Joe Knollenberg is still Hezbollah’s Congressman and his sympathies against HAMAS are as phony as a $3 bill.
If you live in Joe Knollenberg’s suburban Detroit Congressional District, I urge you to vote for Gary Peters in November. A Congressman who supports Hezbollah with your tax dollars is far worse than a Democrat who has a blank record on the matter. Plus, it sends a message that support for Hezbollah in the Republican Party–a growing problem–will not be tolerated. The Democratic Party already supports terrorists and is beyond repair. Only the Republican Party can be saved . . . through tough love. More here.
Thanks Deb!