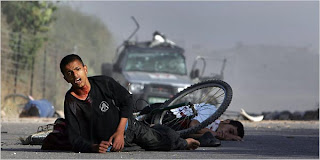 When reviewing any footage or reading any reports relying on Palestinian “sources” concerning confrontations between the Israeli military and the Palestinians, it’s wise to proceed with caution. Not all is what it appears to be.

The Palestinians use the media, local and international, as a wing of its terrorist war against the state of Israel. There are plenty of examples to go around that proves without a shadow of doubt that such manipulation of actual events by the Palestinians exists.

It has proven to be a convenient means to mold public opinion against Israel, without any cost to themselves, because since the Palestinians are not expected to behave according western norms of morality, they won’t be held accountable for their repeated lying and using civilians like cannon fodder. It’s worked well in the past, so why change strategies now?

The video of the tank shooting a shell a couple seconds before the camera goes dark, was taken with a direct line of view. The Al-Beeb report states that the man:

“Fadel Shana, 23, was killed along with two bystanders after he got out of a car marked “TV” and “Press” in central Gaza, the agency reports.”

Looking at the video, the car is clearly in an area where it was completely out of view of the tank, the man was apparently standing on the ridge directly above the pick-up truck, so its marking of “TV” and “press”were not in view of the Israeli military.

The Gates of Vienna has more on the incident, where the Baron offers his own observations of the video clip. No one is denying that the man was killed, but there are other tell-tale signs of manipulation of the scene by the Palestinians. Here are a few of those examples. Baron Bodissey:

The first minute or so of the video consists of a brief segment allegedly shot by the dead cameraman, followed by three segments shot subsequently along the road where the bike-riding kids and the burning truck appear. The first and third of these segments are part of the same general video sequence, but the second one — about fifteen seconds, from 00:42 to 00:57 — is from different footage. It shows the mourning spectators milling about next to the roadside fence.

It’s difficult to be certain, because the camera angle is from the opposite direction, and the sequence is very brief and jiggly. However, the shadows look distinctly longer in this shot, and the cast of light is more orange, as if it were a half an hour or so closer to sunset. In the other sequences, the shadows of the brush on the other side of the road do not cross the road entirely, but in the middle segment they appear to intersect the opposite bank a short distance beyond the spectators.

Augean Stables has this to say about it: My puzzlement is:

This all points to the troublesome aspect of trusting anything the Palestinians are filming for the media, they are too much involved in the political/religious aspect of the fighting. The two males laying on the ground reminds me of earlier scenes of play-acting wounded for the camera, and it’s highly probable that they were acting as props for a real scene that happened, after the fact.

The Tundra Tabloids smells some very foul fish here. If these two males were indeed part of the causality list of the dead, why are their funerals not being filmed and touted as “shaheeds” by a screaming mob? It also appears that this is not the first time the dead cameraman in question, had his car hit while riding with “suspicious people”. These Palestinian cameramen are a part of the Palestinian terrorist movement, not individual newsmen covering stories.

But predictably, B’Tselem, that political Leftist movement that consistently pimps for the terrorists is already trying to exact its pound of flesh, knowing full well that the Arabs use their cameras as part of the fight against Israel. It’ll be awhile before the full facts are in, and like in times past, the facts won’t interest the media, because it’ll be old news by then, at least old to those in the media that could care less for the interesting aspect of the propaganda war being waged by the Palestinians. It just doesn’t serve their ideological views of the conflict very well. *L* KGS