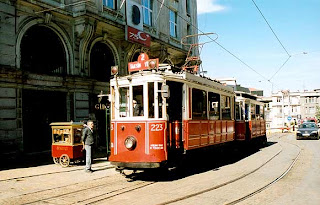 What is one to make of the current situation that exists throughout the Islamic world? Is Islam destined to relate to democracy in much the same way as oil reacts to vinegar? No matter how thoroughly they are thrust together, they will eventually end up on opposite sides?

Dr.Daniel Pipes: “As Erdogan (Turkey’s PM) has revealingly explained, “Democracy is like a streetcar. When you come to your stop, you get off.”

Pipes brings some much needed wisdom to the debate on whether Islam can ever be fully welcomed into the family of religions, that have fully embraced the democratic model/system of governance in the modern age. He makes no pretense that its a forgone conclusion that Islam will indeed take the plunge into modernity.

Two obstacles stand in the way of these changes, however. In the Middle East especially, tribal affiliations remain of paramount importance. As explained by Philip Carl Salzman in his recent book, Culture and Conflict in the Middle East, these ties create a complex pattern of tribal autonomy and tyrannical centralism that obstructs the development of constitutionalism, the rule of law, citizenship, gender equality, and the other prerequisites of a democratic state. Not until this archaic social system based on the family is dispatched can democracy make real headway in the Middle East.

Globally, the compelling and powerful Islamist movement obstructs democracy. It seeks the opposite of reform and modernization – namely, the reassertion of the Shari‘a in its entirety. A jihadist like Osama bin Laden may spell out this goal more explicitly than an establishment politician like Turkey’s Prime Minister Recep Tayyip Erdogan, but both seek to create a thoroughly anti-democratic, if not totalitarian, order.

Whether or not the Islamic world does indeed forgo barbarism and backwardness, totalitarianism and poverty, and join the modern age, will ultimately be decided in within their sphere of influence. The West just needs to be patient and be ready to accept them, whenever they finally decide to join the adult world of civilized behaviour and modern governance. More here. *L* KGS
NOTE: Here are some reasons why the Turkish path to a sustained form of democratic and secular rule, has a major speed bump in the middle of it. The signs of Turkey’s backsliding into Islamism are truly worrisome, with a premature Turkish membership into the EU speeding up the process.