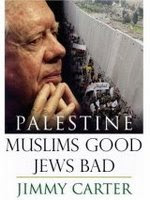 The Tundra Tabloids is reminded of a Bret Stephens column in which he states the following:

Ditto. Former US President Jimmy Carter happens to be one these well intended “goodists” that Stephens talks about in his article, that manage to create more problems than they hope to solve. These kind of useful stooges are eagerly played by the likes of Hamas and ilk, giving them the needed publicity they crave, while increasing the probability that their policy of intolerance and intransigence will be viewed as a major success.

WASHINGTON (AP) – Former President Carter said he feels “quite at ease” about meeting Hamas militants over the objections of Washington because the Palestinian group is essential to a future peace with Israel.

Several State Department officials, including the secretary, Condoleezza Rice, criticized Carter’s plans to talk in Syria this week with exiled Hamas leader Khaled Mashaal in the first public contact in two years between a prominent American figure and the group. Carter said he had not heard the objections directly, although a State Department spokesman said earlier that a senior official from the department had called the former president.

“The position of the government is that Hamas is a terrorist organization and we don’t negotiate with terrorists. We think that’s a very important principle to maintain,” Hadley said. “The State Department made clear we think it’s not useful for people to be running to Hamas at this point and having meetings.”

“I feel quite at ease in doing this,” he said. “I think there’s no doubt in anyone’s mind that, if Israel is ever going to find peace with justice concerning the relationship with their next-door neighbors, the Palestinians, that Hamas will have to be included in the process.”

Carter is an ideologist who refuses to be bothered with any facts that run counter to his perceived “goodist” notions of human nature, and is the reason why he will never be taken seriously by Israel. Besides, Jimmah has been meeting with Hamas for years, so his recent coming out of the closet only further underlines both his foolishness and uselessness. More here. *L* KGS
NOTE: Though Carter lays claim to being “the man” who achieved a peace agreement between Israel and Egypt, all he basically did was to provide the needed international forum for the momentum that was already set in motion by the two sides. Yes Carter deserves some credit, but it was Sadat and Begin that were the chief architects and prime motivators for the peace deal, not Carter.