Kudos to the Baron and Dymphna and ESW for making into the pages of the New York Times! 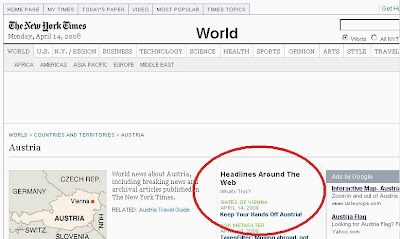 The reason for making it into the NYT’s pages was due to the Baron’s posting of an article by the Austrian correspondent ESW. Nice to see that the big boys are watching.

There are currently three hotspots regarding mosques (including the works such as minarets): One is located in the provincial capital of Linz, about 120 miles west of Vienna. Another mosque is planned in Bad Vöslau, a small town south of Vienna. The hottest spot, however, is located in Vienna, in the district of Brigittenau, a district with one of the highest percentage of immigrants (read Muslims) in Austria.

The mosque in question already exists. It was built in 1996 to cater to 250 worshipers and is run by ATIB, the Turkish-Islamic Union for Cultural and Social Cooperation in Austria. According to ATIB’s website, its members are Turks, Austrians of Turkish descent, and Muslims. ATIB’s purpose is, of course, intercultural dialogue as well as assistance in integration matters. Its principles sound even better: they are based on equality among all humans and racial and sexual non-discrimination. They obviously do not elaborate.

ATIB has been planning the massive enlargement of this mosque for the past decade. These plans include the erection of a larger mosque with an area of 1,500 square meters and a capacity of 1,000 worshippers, a Turkish supermarket (why Turkish? An Austrian supermarket isn’t good enough?), a kindergarten, seminar rooms, as well as apartments. These plans go far beyond the argument of “free religious practice” in order to build a large mosque. The area surrounding the mosque is bound to become a pilgrimage center.

The already unbearable effects of this cultural center include noise, exhaust pollution, and a lack of parking. The organizers of the civil resistance group are demanding the shutdown of this Islamic center and its moving to a suitable location outside residential areas.In the late 1990’s local (including socialist) politicians strongly objected to the proposed center as it violates all objectives of urban development. Such violations include:

Now, in 2008, all promises are forgotten and broken by the socialist politicians. The socialists hold the majority in the district parliament. The civil resistance group adheres to the practice of free religious practice, but if an attempt to live side by side peacefully fails, integration is considered an invasion; if an offer for participation results in ATIB’s takeover, tolerance must end for reasons of self-defense. They have repeatedly offered a hand to their Muslim neighbors, yet had to learn that the Muslims had not only taken the hand, but the whole arm.

The Baron has more on it here. 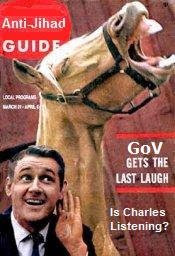 The Gates of Vienna has gone through a lot over the past 8 months, being labeled with all kinds of epitaphs due to its role in bringing about the first ever Counter-Jihad on European soil.

It was a ground breaking event that the Tundra Tabloids was proud to have taken part in.

And to think they had to endure all kinds of slander, abuse and innuendo by a certain fellow blogger.

Once again, kudos to theTundra Tabloids’ good friends ESW and the Gates of Vienna team of Baron Bodissey and Dymphna!