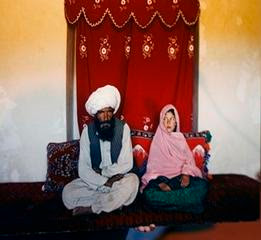 Though the picture is from Afghanistan, the reality is the same as the one in Yemen. A hapless young child is beaten and intimidated with rape by her father to marry a man who is 22 years older than herself. SICK.
Islam’s prophet, Mohamed, is the role model for such behaviour, as the faithful is exhorted to follow his example,…in everything. SICK. *L* KGS
First Jihad Watch:
Yes, child marriage, and hence child divorce, does happen. The Qur’an even envisions the prospect of divorce for prepubescent girls. It stipulates a waiting period to determine whether or not the wife being divorced is pregnant:
“If you are in doubt concerning those of your wives who have ceased menstruating, know that their waiting period shall be three months.” Then it goes on: “The same shall apply to those who have not yet menstruated” (Qur’an 65:4).
It’s good to know, however, that these men were arrested, although it is unclear on what grounds, and doubtful, I believe, that they will actually be prosecuted.

Sharia Alert: “8-year-old girl asks for divorce in court,” by Hamed Thabet in the Yemen Times:

SANA’A, April 9 – An eight-year-old girl decided last week to go the Sana’a West Court to prosecute her father, who forced her to marry a 30-year-old man. Nojoud Muhammed Nasser arrived at court by herself on Wednesday, April 2, looking for a judge to handle her case against her father, Muhammed Nasser, who forced her two months ago to marry Faez Ali Thamer, a man 22 years her senior. The child also asked for a divorce, accusing her husband of sexual and domestic abuse.
According to Yemeni law, Nojoud cannot prosecute, as she is underage. [TT: But not underage to be deflowered by a 30 yr old man] However, court judge Muhammed Al-Qathi heard her complaint and subsequently ordered the arrests of both her father and husband.
“My father beat me and told me that I must marry this man, and if I did not, I would be raped and no law and no sheikh in this country would help me. I refused but I couldn’t stop the marriage,” Nojoud Nasser told the Yemen Times. “I asked and begged my mother, father, and aunt to help me to get divorced. They answered, ‘We can do nothing. If you want you can go to court by yourself.’ So this is what I have done,” she said.
Nasser said that she was exposed to sexual abuse and domestic violence by her husband. “He used to do bad things to me, and I had no idea as to what a marriage is. I would run from one room to another in order to escape, but in the end he would catch me and beat me and then continued to do what he wanted. I cried so much but no one listened to me. One day I ran away from him and came to the court and talked to them.”
“Whenever I wanted to play in the yard he beat me and asked me to go to the bedroom with him. This lasted for two months,” added Nasser. “He was too tough with me, and whenever I asked him for mercy, he beat me and slapped me and then used me. I just want to have a respectful life and divorce him.”… More here.