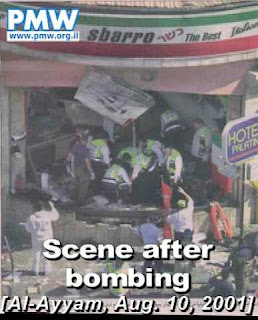 Having personally met the father of Malki Roth, one of the hapless victims of the terrorist genocide at the Sbarro restaurant, I can say that such open adoration for the murderers of the innocent, is a severe slap in the face for those who have lost their loved ones to terror.
It’s amazing that many still hold out their hands in peace and friendship to the Palestinians, in spite of seeing how the Palestinians dance for joy in the streets of Ramallah and hand out sweets after murdering Israelis. Arnold Malki and his wife Frimet, are such people, who have in spite of the loss of their beloved daughter, Malki, continue to hold out their hands in peace to those Palestinians that wish to live as neighbors.

The Palestinian leadership bears a great responsibility for its role in keeping the conflict alive, through its policies of actively supporting incitement against Israel. They have helped to poison the minds of many of their people over the years, and as the Al-Quds article shows, they have a very long way to go before any kind of normalcy can return to their society. *L* KGS

On Aug. 9, 2001, a suicide terrorist entered the Sbarro pizza shop in the center of Jerusalem and detonated his bomb, killing 15 people, including seven children. Five members of the same family were wiped out. The woman who helped plan the attack and drove the terrorist, a university student named Ahlam Tamimi, was sentenced to 16 terms of life imprisonment in Israel. In prison, she married a male terrorist murderer, her cousin Nizar Tamimi.

Continuing the current trend in the Palestinian Authority media to honor past and present terrorists, the Palestinian daily Al Quds yesterday published an interview with the Palestinian poet, Mutawakil Taha, who wrote a book honoring the terrorist couple. He described them as “the two great heroic prisoners Nizar Tamimi and Ahlam Tamimi.”

Mutawakil Taha: “Two years ago I wrote the book “Ahlam ibn al-Nabi” about the two great heroic prisoners Nizar Tamimi and Ahlam Tamimi, whom we are proud of. A month ago I wrote the poem “Marwan” about Marwan Barghouthi, [serving 5 life sentences for murder – Editor] as a symbol of the fight voiced by the prisoners. I feel that the prisoners are Martyrs in potential, and that we should bond with them without question or accounting. We should bond to the prisoners unconditionally as we bond to the Martyrs and the homeland.”
[Al-Quds, April 7, 2008]