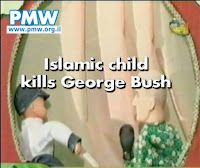 The Tundra Tabloids post the following astute observation from its good friend and fellow blogger TINSC.
The skit starts off with the usual long list of grievances real or imagined (mostly imagined). Then something amazing happens: President Bush offers to make amends. He says he’ll do anything the little boy wants.

He’ll invite him and all his friends to the White House where there will be food and toys. He says he’ll talk. President Bush offers ANYTHING the little boy wants. The boy laughs at the President’s offer.

At this point, the little boy reveals the REAL reason he wants to slay President Bush: President Bush is “impure”, a kuffar. You see, this is Islamo-Fascism’s jihad in a nutshell. There is nothing we can give them. We can’t give them money, food, clean water, or even land because we are “impure”. There is no sense in negotiating as they don’t want to negotiate. They don’t even want to negotiate our surrender. They want us to die because we are “impure”.

The list of grievances offered by Islamo-Fascists are just window dressing for useful idiots in the chattering classes. We are left to believe that the Islamo-Fascists’ actions are rational. They are not and this skit, if observed carefully demonstrates it. You might want to check out the link on MEMRI for a more elaborate translation and transcript of the skit.

Bush: “Who are you? What brings you to my home? How did they let you in, boy? My guards! My soldiers! Get this boy out of here.”

Child: “Nobody will take me out of here.”

Bush: “Who are you to come here and threaten me?! You are on my own turf, you little child, you! Get out. My dear, bring your father, your grandfather, or your mother, so I can talk to them. Get somebody older and smarter than you. What, you came here on your own?”

Child: “I have come to take revenge with this sword – revenge for my mother and my sisters. You are a criminal, Bush! You are despicable. You made me an orphan! You took everything from me, Bush! I must take revenge on you, with this sword of Islam, the Prophet’s Al-Battar sword.”

Bush: “No… No, my dear. I give you my word that this is it. I repent, just don’t kill me. Where are my guards? Where is my people? Help! Help! He wants to kill me. Help!”

Child: “There are no guards, and your people has surrendered, Bush. I have not come alone, Bush. I have brought thousands of thousands of children from Palestine, Iraq, Syria, Lebanon, and Afghanistan. You have denied all these children their fathers and mothers. That’s why I have come to take revenge on you and on all the criminal traitors who collaborated with you.”

Bush: “Okay, fine, that’s enough. I will give you whatever you want from me.”

Child: “You are impure, Bush, so you are not allowed inside the White House.”

Bush: “What are you saying?! Why am I not allowed into the White House?”

Child: “Because it has been turned into a great mosque for the nation of Islam. I will kill you just like Mu’az killed Abu Lahab. I will kill you, Bush, because that is your fate.”

TINSC is absolutely correct in the analysis given, the Hamas reveals it true agenda once again for the world to see, yet the hand wringers and bed wetters in the West, will still try and claim that Hamas is a “pragmatic welfare organization” that just happens to field its freedom fighters against Israel from time to time.

The next story goes hand in hand with the one above. Al-Qaida’s No 2, Ayman al-Zawahri makes it clear that he wants to murder Jews wherever they may be:

“We promise our Muslim brothers that we will do the best we can to harm Jews in Israel and the world over, with Allah’s help and according to his command.”

Those commands this pious Muslim is following is the Qur’an and the Hadiths, and what notable Islamic scholars are going to stand up and show us all exactly where Zawahri is getting it all wrong? I’ll save you the trouble, they won’t be publicly correcting the Islamic terrorist, because they can’t. *L* KGS