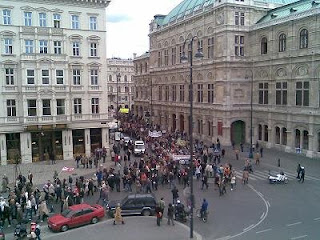 When a major demonstration is held in Vienna, protesting against the EU elite’s vision for a federalized Europe, and the media refuses to cover it in any meaningful way, then the question is…did it ever really happen?

Answer: YES IT DID! The Tundra Tabloids Austrian correspondent, ESW sent the Tundra Tabloids the following report, and due to initial software problems (now sorted) the TT was unable to earlier provide the needed pictures that details the event. *L* KGS

A demonstration comprising people from all walks of life, from all political parties (except the Greens), from young to old convened in front of the famous Staatsoper (State Opera) in the center of Vienna to demonstrate against the ratification of the Lisbon Treaty in the Austrian Parliament on April 9, 2008, without holding a referendum.

The demonstration was organized by non-political platform called “Save Austria” (http://www.rettet-oesterreich.at/). The protestors marched peacefully from the opera house to St. Stephen’s cathedral, where university professors – such as Hans Peter Aubauer from the University of Vienna (Environmental Physics), Adrian Hollaender, professor of European Law at the University of Vienna and the University of Klausenburg, Romania, and others – spoke about the implications of the Lisbon Treaty and the absolute constitutional necessity for a referendum. 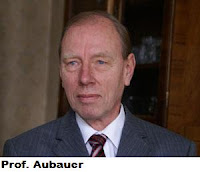 The organizer introducing Professor Aubauer.
Excerpts from Professor Aubauer’s speech:
“All the member countries of the European Union, including Austria, must be able to decide in a referndum on the Lisbon Treaty. It must not be imposed on us! It will end democracy in Austria, the freedom of doing politics in the interest of the Austrians. Decisions regarding our destiny and future will then be decided by politicians who have not been democratically legitimized and who cannot be voted out.

Because our politicans are afraid that we will not decide to get rid of democracy, they do not risk referendum and thus abolish democracy without our approval.

In June 1994, a referendum was held regarding Austria’s accession to the EU. There was no fairness, only propaganda during the campaign: The Austrian currency, Austria’s neutrality, and the freedom of political decisions would all remain. We would simply be able to take part in European decision-making. And now we are told the excact oppostite: That we had already decided for the abolishment of democracy back then! We had given a blank check for all decisions made after accession to the EU.

Now our politicans are saying: tough luck! You, the people, have been lured into a trap with the help of our propaganda, and we will not let you out of it! Back then you agreed to ceding sovereignty to foreign lobbies forever and ever.

However, there was no decision made on a blank check in 1994. According to the constitutional law on Austria’s EU accession (September 1994), the referendum voted on the result of the negotiations (between Austria and the EU). And nothing else.

We are told that there was no referendum on the Treaties of Amsterdam and Nizza as well as the accession of the new member states, so why should we be asked now? The law was broken back then, and this does not mean the law can be broken again!”

Unlike the demonstration two weeks ago, the Austrian Broadcasting Corporation was at least present. Whether the voice of at least 10,000 plus worried citizens will be heard, remains to be seen.

More demonstrations are planned for both Friday and Saturday next week. 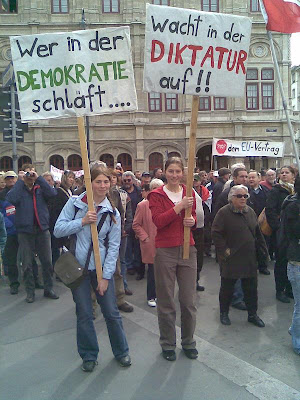 “Sleep during democracy and you will wake up in dictatorship” 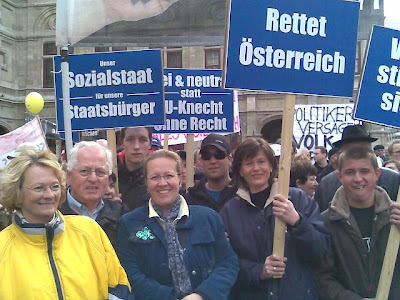 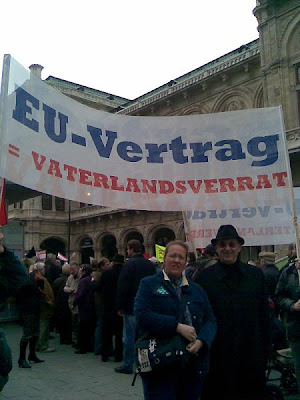