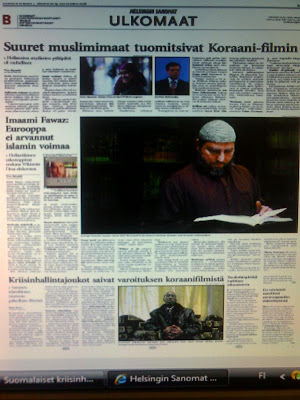 It was to be expected. For those of us in the blogosphere that follow the news reporting by the Finnish news media on a daily basis, the whole front page of the B/Foreign news department in today’s edition of the HS, does not come as a surprise.

The thrust of the news reports were to get the Muslim reaction to the Islam critical, 15 minute movie, Fitna, by Dutch parliamentarian, Geert Wilders. So the HS sent their journalist, Tiina Rajamäki to do a one on one interview with Imam Sheik Fawaz Jneid, the Dutch imam who is quoted in the Fitna movie, saying:

“In the Netherlands, for example, one is allowed to commit adultery or to be gay. But I don’t feel called upon… to be a party to that, because islam considers something like that a crime.”

It’s a fact that a journalist has the absolute right to pursue any angle to a news story, but it also includes the responsibility to give an accurate picture of the person(s) being interviewed, as well as providing a proper context to the story being reported. HS journalist, Tiina Rajamäki, failed miserably in doing just that.

While Geert Wilders is labeled “far right wing” and “populist” three times, and there is no question about that, Tiina Rajamäki chooses however, to depict the imam as only being CONSIDERED a radical [“äärioikeistolainen populistipolitiikko” vs. “radikaalina pidetty imaami”]. In other words, the HS accepts the former label without question, but doubts the latter.

A TT anonymous Finnish correspondent makes the observation that: “The HS does not ask the imam anything about the quote (Jneid makes in the Fitna movie), nor offers the quote to the readers. HS asks no questions to the imam about his attitudes to gay rights, women’s equality, Dutch law or Western democracy in general. They have taken the trip to Amsterdam – and used half of the paper’s page – only to ask him about his views about Wilders, which are predictable and which HS appears to accept with no critical distance.

In the story next to the imam interview Wilders is condemned by politicians and more Dutch Muslims are cited. A 15-year old Muslim girl, Fatina Daouary, pictured nice and smiling, says matter-of-factly: “It seems as if he [Wilders] really wanted a terror strike in the middle of central Hague”. Again, HS does not ask whether she thinks that’d be ok.”

(Editorial note: Once again the threat of violence if the infidel does not submit, or act as a dhimmi should)

“HS comments the Fitna movie through the imams’ mouth, saying it quotes the koran “out of context” (surprise!) and in a wrong way. It does not say anything about the contents of the quoted verses. Or the quoted speeches. It just condemns Wilders, over and over again.
Maybe someone else reads it differently, but it seems to me that HS, having always tiptoed around Islamic issues, now has openly taken the side of even the most radical islamists.”

I believe that the TT’s anonymous correspondent has nailed it squarely on the head. This is an all to familiar theme in the HS’s chosen style of “powder puff” reporting on the real extremists and intolerant groups in the world today. The HS and others in the Finnish news media are certainly guilty of pandering to extremists, such as the Hamas, Fattah and Hezbollah, by failing to consistently ask the hard questions that need to be asked.

The media’s failure to treat people that do not share common western values, in the same way as it treats those that do, stems from a humanitarian racist point-of-view, which attributes intrinsically reduced responsibility for their acts to people of certain ethnic, national or religious groups.

When it comes to refusing to tell it like it is, the decision by LiveLeak to delete the Fitna account, the Helsingin Sanomat couldn’t be happier. *L* KGS