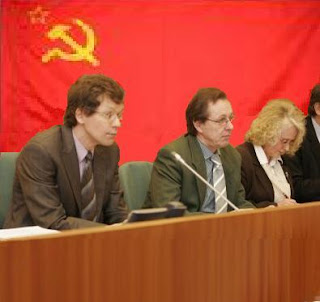 Back to the USSR. The Finnish courts decision to fine Finnish blogger Mikko Ellilä is a severe blow to fundamental rights governing free speech. No matter how distasteful the views held by Ellilä, I believe that after viewing the stranscript of the court proceedings, the Finnish blogger presented his views in a very cognitive and rational way.

Another aspect to the case, is whether he should have been forced by a court to have to explain his views at all. The Finnish State Prosecutor’s line of questioning: “what was your intent”, should send a chill up everyone’s spine, no matter what the issue is about. This scaling back of liberal freedoms -if it isn’t overturned by a higher court- comes at a crucial time when civil liberties are under attack by those who want to limit what one can say about Islam.

“A court sentenced the 30-year old Espoo resident to a fine for inciting racial hatred. It found that the man’s writings on the Internet constituted illegal propaganda. The judgment ruled that the man slandered Africans by comparing them to animals. In his defense, the man said that laws governing freedom of speech protected his right to express his opinion.”

State Prosecutor Mika Illman: I would like to refer to some sources. [Illman’s sources were two Finnish books: Rikosoikeus (“Penal Code”), a university textbook, and Syrjinnän vastainen käsikirja (“The Anti-Discriminatory Handbook”), published by The International Organization for Migration.] It is true that there is a lot of violence in Africa. However, this does not justify generalisations about immigrants living Finland having a tendency to commit acts of violence. I don’t deny that there are immigrants in Finland who commit crimes, but discussion about such matters should be conducted in a respectable vein. Presenting half-truths and coloured truths, as Ellilä does, fulfills the criteria of incitement against an ethnic group. Sentences that begin with words like “Africans behave…” or “Negroes only obey…” are much too broad generalisations to be considered acceptable.

[Reads from one of his source books.] Claiming that one ethnic group is less intelligent than another can also be considered slander. The claims made by Tatu Vanhanen and Richard Lynn are disputable. In referring to these claims, Ellilä is in my view trying to back up his statements in a quasi-scientific manner. As for VDare, it is by no means a scientific or an objective organisation, but an organisation that leans to the extreme right: for example, it opposes Mexican immigration into the United States. I do not consider it an objective source.

Ellilä: I would like to point out that the political leanings of the organization in question are completely irrelevant, since I wasn’t referring to the review on their website, but merely to a diagram included in that review, which was based on the findings in Vanhanen’s and Lynn’s book. I could have just as well provided the court with merely a copy of that diagram. The fact that the prosecutor refers to the “extreme right leanings” of the organisation is in my opinion an indication that he is trying to politicise this trial.

Illman: I consider the charge to have been substantiated. This is a matter of principle. The text is to be confiscated by the state and removed from the Internet. I also demand that the defendant be fined.

Ellilä’s attorney Kari Silvennoinen: The charge has not been substantiated. Removing the text from the Internet would be tantamount to book burning. The prosecutor claims that this does not violate freedom of opinion, but what’s the use of freedom of opinion if you can’t publish your opinions? The prosecutor has not been able to substantiate the charge of incitement against an ethnic group at all.

I find it hypocritical of the prosecutor to defend freedom of opinion at one moment and to invalidate it the next – you’re entitled to your opinion, but you’re not allowed to state it out loud. That’s the way things were in the Soviet Union.

I whole heartedly agree. Regardless of what we might think of Ellilä’s POV, whether it’s grossly simplistic and flawed, the best recourse is a full airing of positions in public and a thorough debunking of the claims made by Ellilä, not through the clamping down of free speech. More here. *L* KGS
NOTE: Please take notice that the State Prosecutor labeled the VDare organization as an extreme right wing group. As any seasoned reader of the Tundra Tabloids knows fully well that the national socialist ideology has clear foundations in Leftism. Not only that, the ethno-racial supremacist ideology also has its beginnings in Leftism, or should I say… Marxism. When Hitler began his designs for the Jews of Europe, he was borrowing from his Marxist past all that he had learnt about the difference in races, as did Joseph Stalin with the liquidation and forced removal of a vast number of different ethnic groups in the Soviet Union.
UPDATE: The blogger Adelphi informs the TT with the following:
A very good post, but one minor detail is perhaps worth noting: the transcript published in Matias Turkkila’s blog is not a full transcript of the court proceedings, but a selection. There were some other issues covered in the trial that are not included in the transcript. I would still say that it covers perhaps about two thirds of the proceedings.
It is also not an accurate transcript in the sense that it was not based on a taped recording of the proceedings, but rather on Matias Turkkila’s notes made during the trial and in some details on my own and Mikko Ellilä’s memory. Since I translated the text into English, I am not, of course, an objective judge of how accurate it is, but I would say that as far as the substance of the statements is concerned, it is a reasonably faithful representation of what the participants actually said.
NOTE: The TT is very grateful to Adelphi for providing this important information. While it’s unfortunate that the there is no full transcription available, this honest attempt to reconstruct the proceeding from a collection of notes and memories, is indeed a great accomplishment.
Kudos to all of you.