Israeli Ambassador to the UN Dan Gillerman delivered a stern warning to UN Security Council members yesterday that “the recent lull in Gaza was both deceptive and superficial.”

“Though some wish to refer to the apparent lull in Hamas’ rocket attacks, I must warn that the perceived quiet is only on the surface,” Gillerman said. “The bombs keep ticking, albeit quietly.”

Statement to the UN Security Council by Ambassador Dan Gillerman,
Permanent Representative of Israel to the United Nations 25 March 2008″

Situation in the Middle East, including the Palestinian question”

Allow me to congratulate you on your very able stewardship of the Council this month, and thank you for your principled leadership. We are grateful to the Secretary-General for honouring us with his presence and for his commitment. I also wish to thank Under-Secretary-General Pascoe for his briefing. On this note, I wish to make clear that Israel does not act against “alleged” militants but against declared and recognized terrorists. I hope “alleged militants” is not the UN’s new definition of terrorism.

The struggle of the moderates against the extremists which is raging around the world is the defining challenge of our day. Across the globe, forces of extremism seek to transform resolvable political conflicts into endless religious wars, using all means of violence at their disposal. They fight not for their own rights, but to deprive the rights of others. In our region, Iran, a notorious state sponsor of terrorism, uses proxies like Hizbullah in Lebanon and Hamas among the Palestinians to draw the moderates into a cosmic battle, where victory is not about achievement but about total annihilation.

The very ideology of the extremists makes a dialogue with them impossible. Which is why Israel – along with other like-minded states – understands that dealing with extremists is a zero-sum equation. In contrast, negotiations with the moderates, as Israel is doing with a moderate Palestinian Authority leadership that renounces terrorism and violence, can yield great benefit for both parties.

I want to believe that my Palestinian colleague represents the moderates in spite of the distorted picture he felt compelled to draw today.

As we have seen, the extremists will stop at nothing to break the coalition of moderates and destroy all prospects for peace. During the last month, Hamas fired more than 300 rockets at Israel, at least 23 of them Iranian-made Grad missiles that hit the city of Ashkelon, a quaint coastal city with a population of 120,000. 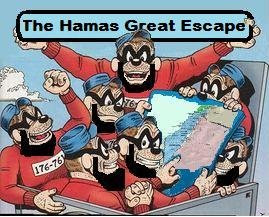 The rocket attacks marked an escalation of violence not just in number, but also in weaponry. Grad rockets – smuggled into the Gaza Strip from Iran during the breach of the Gaza border this January – have greater range, larger warheads, and fragment on impact. Hamas’ new weapon of choice means that a quarter of a million Israeli civilians now live in constant danger of rocket fire. We can all thank Iran for adding another weapon to the Hamas arsenal, in addition to its already heinous suicide attacks and deadly Qassam rockets.

That aspect of the breach of the Gaza border with Egypt has yet to explored in any meaningful way by the Finnish main stream media. As far as they are concerned, the breaching of the fence was a “sudden spontaneous reaction” to the Israeli blockade of Gaza. They have yet to show any interest in the fact that the border fence with Egypt had been undermined months in advance, and with the sole purpose of bringing in missiles with a greater range capacity.

The Finnish MSM’s refusal to give a factual accounting of the incident, as well as its failure to honestly discuss the facts in the editorials of its newsprint media, makes the Finnish media a (hopefully unwilling) participant to the Hamas agenda of targeting Israeli civilians. Shame on the lot of them, for the Finnish blogosophere was all over the story (the true reasons behind the breach and how it was a planned event) and they failed to pick it up.

Even after the launching of Iranian made Grad missiles, the Finnish MSM failed -on repeated occasions- to report the connection between the months old plan to breach the fence and for what purposes, choosing rather to report regurgitated Hamas talking points.

The UN bears a great shame for allowing Libya a seat on its Security Council, which was directly responsible for its inability to draft a declaration condemning th

e massacre of Israeli religious students. Shame on the lot of them.

It’ll take the west generations to get back to something resembling an actual reality of the way things should be viewed. That’s just how far the rabbit hole has indeed gone. More here. *L* KGS