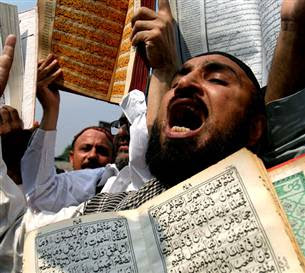 From Don Morris at Doc’s Talk:

Islam has religious, legal, political, economic and military components. The religious component is a beard for all the other components.Islamization occurs when there are sufficient Muslims in a country to agitate for their so-called “religious rights.”
When politically correct and culturally diverse societies agree to “the reasonable” Muslim demands for their “religious rights,” they also get the other components under the table.Here’s how it works (percentages source CIA: The World Fact Book (2007)).

…As long as the Muslim population remains around 1% of any given country they will be regarded as a peace-loving minority and not as a threat to anyone. In fact, they may be featured in articles and films, stereotyped for their colorful uniqueness:

At 2% and 3% they begin to proselytize from other ethnic minorities and disaffected groups with major recruiting from the jails and among street gangs:

From 5% on they exercise an inordinate influence in proportion to their percentage of the population.

They will push for the introduction of halaal (clean by Islamic standards) food, thereby securing food preparation jobs for Muslims. They will increase pressure on supermarket chains to feature it on their shelves — along with threats for failure to comply. (United States).

At this point, they will work to get the ruling government to allow them to rule themselves under Sharia, the Islamic Law. The ultimate goal of Islam is not to convert the world but to establish Sharia law over the entire world.

When Muslims reach 10% of the population, they will increase lawlessness as a means of complaint about their conditions (Paris — car-burnings). Any non-Muslim action that offends Islam will result in uprisings and threats (Amsterdam — Mohammed cartoons).

At 40% you will find widespread massacres, chronic terror attacks and ongoing militia warfare:

From 60% you may expect unfettered persecution of non-believers and other religions, sporadic ethnic cleansing (genocide), use of Sharia Law as a weapon and Jizya, the tax placed on infidels:

100% will usher in the peace of “Dar-es-Salaam” — the Islamic House of Peace — there’s supposed to be peace because everybody is a Muslim:

Of course, that’s not the case. To satisfy their blood lust, Muslims then start killing each other for a variety of reasons.

“Before I was nine I had learned the basic canon of Arab life. It was me against my brother; me and my brother against our father; my family against my cousins and the clan; the clan against the tribe; and the tribe against the world. And all of us against the infidel. — Leon Uris, “The Haj”
It is good to remember that in many, many countries, such as France, the Muslim populations are centered around ghettos based on their ethnicity. Muslims do not integrate into the community at large. Therefore, they exercise more power than their national average would indicate.
Adapted from Dr. Peter Hammond’s book: Slavery, Terrorism and Islam: The Historical Roots and Contemporary Threat.. www.frontline.org.za/bo oks_videos/sti.htm