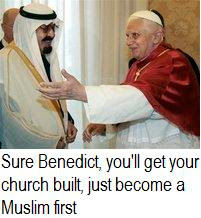 Well Rome didn’t have to wait too long for the Saudi’s response to whether a Catholic church could be built in the Kingdom of Saud.

Riyadh, 20 March (AKI) – No churches should be permitted in Saudi Arabia, unless Pope Benedict XVI recognised the prophet Mohammed, according to a Middle East expert. While Saudi mediators are working with the Vatican on negotiations to allow places of religious worship, some experts believe it will not occur without this recognition.

Anwar Ashiqi, president of the Saudi centre for Middle East strategic studies, endorsed this view in an interview on the site of Arab satellite TV network, al-Arabiya on Thursday.”I haven taken part in several meetings related to Islamic-Christian dialogue and there have been negotiations on this issue,” he said.”

It would be possible to launch official negotiations to construct a church in Saudi Arabia only after the Pope and all the Christian churches recognise the prophet Mohammed.” “If they don’t recognise him as a prophet, how can we have a church in the Saudi kingdom?”

I have mentioned more than once that any “dialogue between the faiths” is always used as a means to further Islam’s dominance over the other. If you’re looking for a turning of the other cheek and live and let live kind of fuzzy “we are the world” response,….you’ll be greatly disappointed. Why yes, amongst individual Muslims there is room for friendly debate and co-existence, but within the body of Islam, well,…..don’t get your hopes up.

So while mosques are being built throughout the western world, the House of Saud sends a firm and clear message to the faithful, do not be tolerant towards other non-Islamic beliefs, because we sure as hell don’t. More here. *L* KGS

NOTE: Saudis also reject Act Against Defamation of Religions, they would be forced to recognize deviant/infidel faiths.
Council member Khaleel al-Khaleel was quoted by the Saudi Gazette as warning against a “trap,” and saying that religious concepts differ from country to country and from civilization to civilization.”Should Muslims be committed to respect and not criticize any deviant creed that some people consider a religion?” he asked.Another member, Talal Bakri, said a convention against “offending religions” could lead to calls for Muslim countries to allow temples of pagan religions.
What? The Islamists are upset that they would be forbidden to criticize “the deviant creeds others consider a religion?” Whooooooah Nellie! For the very first time the TT can agree with an Islamist! The Mohammedans should have the right to criticize any religion, but with that freedom comes the right for anyone else to criticize Islam.