Palestinian children in Gaza were gathered for an exhibition that depicts Israel burning children in a crematorium. Young children are seen standing beside dolls being placed into a model of a cremation oven. 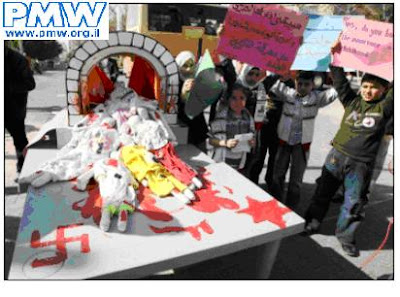 According to the article in Al Ayyam, “The National Committee for defense of Children from the Holocaust opened its activities with a Holocaust exhibit. The Exhibit include a large oven and inside it small children are being burned, the picture speaks for itself.” [Al Ayyam, March 20, 2008] 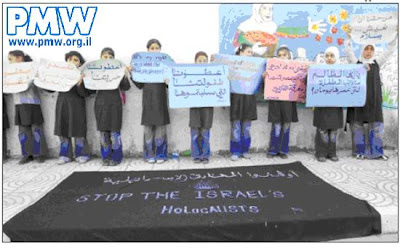 Another part of the exhibit was a black platform with the words, “Stop the Israel’s Holocausts.” [Al Hayat Al Jadida, March 20, 2008]

Palestinian Authority (Fatah) TV already already taught children in the past that Israel burned children in the Holocaust. With ovens pictured in the background and actors playing dead children as part of a musical play, an actor in a video declared:

“They [Israel] are the ones who did the Holocaust … They opened the ovens for us to bake human beings… and when one oven stopped burning they lit a hundred more ovens.” [PA TV March 25, 2004]

NOTE: This is how the Palestinians prepare their youth for the future, which obviously excludes peaceful co-existence with Israel. When this kind of mentality is no longer condoned within Palestinian society, only then can any Arab talk about peace with Israel be viewed with a cautious optimism. *L* KGS