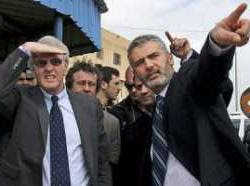 The very worn out and retreaded mantra of the “cycle of violence“ that is often used to describe the conflict between Israel and the Palestinians is once again on display in the opinion pages of the Helsingin Sanomat. UN Sec-Gen for humanitarian affairs, John Holmes, was in Gaza last Friday, and the leopard hasn’t changed its spots.

UN and state officials, as well as many in the international media never seem to tire of the dubious term, because it’s so easy to use, and it doesn’t require much effort to explain!

It is both morally and factually wrong to describe the violence within the Palestinian/Israeli conflict as a “cycle of violence” when one side has a stated policy to maximize the casualties of Israeli civilians with every attack, while the other (Israel) takes great steps in trying to minimize the casualties to civilians whenever possible. But that has not stopped the international bureaucrats at the UN -nor the Finnish media that publish their very skewed views- from delivering a very naive and childish depiction of the situation.

Tundraman: Today it is again the Helsingin Sanomat (17.03.08 subscription only). This time HS has chosen to let a UN official speak (how convenient):

In addition, the column -Guest Pen- contains all the clichés about Gaza, that it is a “barrel of gunpowder”, an “outdoor prison”, lacks “everything necessary for living”, and, not to forget the barely hidden threat:

And of course, in the list of “what-needs-to-be-done”, the UN official puts the ending of the rockets only third on his list (after Israel has done this and that), although he states in the very beginning that he condemns the rockets. In addition, only the actions of Israel are defined as being “against international humanitarian law” – not a single word on how much the rockets are against all laws …

Special thanks to Tundraman, who once again offers a very fine analysis of how the media -and those it allows to “grace its pages”- are guilty of an overt bias towards Israel. I also believe that the Holmes op-ed personifies exactly the same kind of humanitarian racism that Europe projects vis-a-vis the Palestinians and the Arab world.

Humanitarian racism needs to be exposed for what it is, pure racism, no matter how well intended. Treating the Palestinians like children or “less than the Europeans, is just old fashioned racism, not unlike what black afro-Americans experienced in a segregated South. Even the Serbs are to be held accountable for the nationalists they bring into power (read = no advancement for EU membership) and Belarus is not taken seriously by the EU as long as a Stalinist regime runs it. Nor are the Turks getting a free ride, at least they are being (on paper) held to a higher standard.
Only in the ME are people not to be held accountable for their miserable choices, and they know it, just scream a bit and the Europeans and the Americans come running like dutiful dhimmis and shower them with more jizya money to help shut them up. If there is any “cycle” in the ME, it’s the one just mentioned. The only country treating the Palestinians as equals, are ironically, the Israelis. They treat them as human beings, and demand from them the same kind of high standards that the West demands from the Jewish state.
Melanie Phillips writes concerning the very grave dangers Israel faces -in part due to the way the conflict is covered- that:

“This is why what is — with such tragic inadequacy — called the ‘bias’ of the western media against Israel is of such monumental importance. The manipulation of world opinion is a key strategic component of the Islamists’ war against the Jews in particular and civilisation in general. That is why the western media — with its structural animosity towards Israel and the key role it is playing in ensuring that such distortions and incitement trap Israel so that it is damned whatever move it makes — must now be considered the Islamists’ key strategic asset in that war.”

It’s that serious. The media is going to have to take a deeper look at itself and ask, “if the way they have reported on the conflict could influence the increase of hostilities. The Palestinians have always counted on the media to portray Israel in a bad light when they ramp up the violence from time to time, which increases international pressure on the Jewish state to bend to its will. *L* KGS