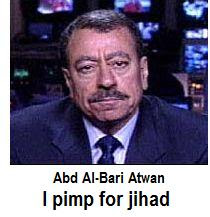 Abd al-Bari Atwan: I can approve of cold blooded murder and still maintain my credibility as an analyst for the British media!
The Tundra Tabloids is completely disgusted over an editorial by Abd al-Bari Atwan, editor of the London based news daily, Al-Quds Al-Arabi, and regards him with the highest degree of contempt imaginable(and by default, the British news media). In a Sunday editorial, the editor of the pan-Arab news daily expressed his approval over the murders of eight Israeli students, deeming their cold blooded murders as “justified”.

The editor of a pan-Arab daily published in London says the terrorist attack on Jerusalem’s Mercaz Harav Yeshiva on March 6 attack was “justified” and that the religious seminary is responsible for “hatching Israeli extremists and fundamentalists.”

In his lead article last Sunday, Abd al-Bari Atwan, editor of Al-Quds Al-Arabi, chose not to condemn the shooting attack in which eight students were killed and nine were wounded, and said the celebrations in Gaza that followed symbolized the “courage of the Palestinian nation.”
He added that the recent violence in Gaza might “mark the countdown to Israel’s destruction.”

“This article is alarming, since Atwan is perceived as a legitimate and unbiased analyst by the British media, and is often invited to voice his views in different media platforms,” said Lior Ben-Dor, spokesman at the Israeli Embassy in London. “The problem is that when addressing the British public, he tends to hide his true opinions and ideology – his support for terror and the murder of civilians. This article reveals Atwan’s real colors, a supporter of fundamentalism and terror, and hence he should be treated accordingly.”

But wait a minute, why would Atwan’s utterly disgusting and morally challenged statements over these eight Israeli deaths, now cause him to loose stature in the eyes of the British media? This isn’t the first time he has made revolting statements that expressed his true violent nature and ethically challenged bias, as the following statement in the same article attests:

“In an interview on ANB Lebanese television in June, Atwan said, “If the Iranian missiles strike Israel, by God, I will go to Trafalgar Square and dance with delight.”

So in spite of his statement from last year, Atwan is still perceived as a legitimate and unbiased analyst on the Middle East by British media. How nice is that? It really tells you just how far the media has slid in its professionalism, with it just barely scrapping the bottom of the barrel.

It would be well within Israel’s rights to banish the British media -at least those segments of it that have proven time and again to hold a serious imbalanced view of the conflict- from operating inside of Israel. The should be forced to report from Amman, Beirut or Damascus. These highly biased news outlets are afforded all the comforts that a highly westernized state has to offer, and use the freedom of that democracy to pimp for the forces of jihad.

Time for Israel to give them all the boot, and let them make do with what the rest of the region has to offer. Israel clearly won’t be hurt by the already highly biased international news media, perhaps not making themselves so readily available to the western media will cause some of these journalists and their “gatekeepers” to review their past discretion’s and see things in a newer light. At least it’s just a thought. More here. *L* KGS