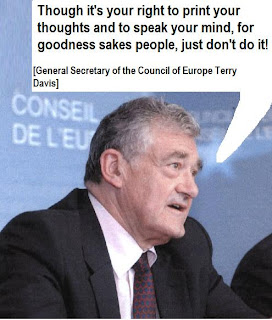 Over at the Gates of Vienna, Baron Bodissey has published a couple of op-eds from the Jyllands-Posten -translated from Danish into English- that show just how useless some our fuzzy headed European politicians really are. It’s well worth the read.
Terry Davis: “Freedom of speech should not be exploited as a freedom to insult“
Jyllands-Posten: Freedom of expression is exactly the freedom to insult anyone within the framework of the law. It is the very essence of freedom of speech as the foundation of the democratic way of governing, that one is able to come forward with points of view which some people may find insulting, and that one is able to come forward with information that some people would like to be ignored or suppressed.
That freedom of speech should be used with grace and that you should avoid insulting people who react with wanton destruction, murder, and boycotts is now a well known point of view.The sombre part of this affair is that it comes from the General Secretary of the Council of Europe.
Over at the blog of the Jyllands-Posten’s very own Flemming Rose, an Afghani FM whines in a similar vein during a press conference in Copenhagen.
Rangin Dadfar Spantan: ”I condemn in every possible way that the right to free speech is being used to insult one billion Muslims. It’s a result of islamophobia. Instead we need to use our right to free speech to enlighten our people and promote cultural dialogue that is being threathenend by two kinds of extremists: Those fighting on the battle field and those who are sitting behind their desks.”
Flemming Rose: “He was comparing the Taleban to me and other editors in the Danish press and sounded like a commissar from a Soviet puppet regime. What does he know about a billion Muslims’ feelings? Let me remind you that Mr. Spantan spent 20 years in Germany as a refugee from the Soviet occupation. He was a professor of political science at the university of Achen, and used to be an active member of the Green Party before he returned to his native country three years ago. So this is a man who should know better.
Fortunately, Denmark’s minister of foreign affairs Per Stig Moeller, didn’t let this kind of stupidity pass unnoticed. ”It’s difficult for me to put Danish soldiers’ life in danger in order to support a government where one is at risk to be condemned to death for values that we believe to be an inseparate part of democracy and the modern world.” Denmark has several hundred soldiers in Afghanistan and a few have lost their life.”